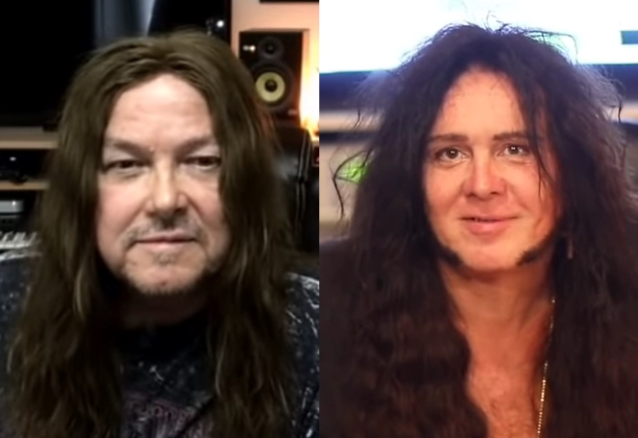 Acclaimed hard rock singer Mark Boals, who is noted most for his vocal work with Yngwie Malmsteen, appearing on four studio albums, including the hard rock classic "Trilogy", discussed his collaboration with the neoclassical guitar virtuoso during a recent appearance on "Waste Some Time With Jason Green".

After working with some of the top hard singers of the past four decades, Yngwie now handles much of the lead vocals himself in his own band, backed by a lineup that includes keyboardist Nick Marino, bassist/vocalist Ralph Ciavolino and drummer Brian Wilson. Asked by Green if he has heard any of Malmsteen's recent attempts at singing, Boals said (as transcribed by BLABBERMOUTH.NET): "Unfortunately, I can't unhear it. But I knew what his voice was like from before. I think when we were recording [1999's] 'Alchemy', he came to me and said, 'Man, I've been taking voice lessons for eight years. What's wrong? What am I doing wrong?' And I said, 'Well, Yngwie…' His voice, it just doesn't sound good; it doesn't have a good sound; it doesn't have a pleasing sound. He can sing notes, but they don't sound pleasing. I didn't know what to tell him. But that's the fact. He tries really hard."

Mark continued: "A singer is a totally different ballgame than being [an instrumental] musician. You can't just just pick up a [Ronnie James] Dio-model voice and put it on and sing like Dio, or put on an Ian Gillan voice and sing like Ian Gillan. You've gotta work with what you have; it's a physically limiting thing, and it's a talent. Just like playing guitar. I can't pick up a guitar and play like Yngwie, so I don't know why he thinks he should be able to just step up to a microphone and sing like me or anyone else."

When Green made the point that Malmsteen chooses to handle lead vocals himself because he wants to avoid conflicts with a singer, which isn't necessarily the best thing for his show, Boals said: "I tend to agree with you, as well as a lot of other people do, but he doesn't see it that way. I don't know how he got to be so lucky — he's had some of the best singers around. I mean, he's had Jeff Scott Soto, who's great. He had Joe Lynn Turner — I love Joe Lynn Turner. He's had Doogie White, another great singer. He's had Ripper Owens, another guy from Ohio, who's another great singer. And I think after that, he just stopped hiring singers after that, I guess."

Pressed about whether there is any chance he would ever work with Yngwie again, Mark said: "Well, I don't wanna say there isn't any chance in hell, but I can say when hell freezes over, like THE EAGLES did. It would require some differences in the way things are done — that's all. I always respected his talent, and I tried to get him to do things a little different, but he's a very stubborn guy, and he does what he wants. I don't see it happening, because he would have to eat a lot of crow just for admitting that he needs a singer, 'cause he has taken the position that he doesn't need a singer."

Boals is not the only former Malmsteen singer to criticize the guitarist's current stage setup. Last year, Turner told the "80's Glam Metalcast" about Yngwie's recent live shows: "He pushed the band over to the side and he's got 15, 20 amps and he's in centerstage and he's trying to sing, and I go, 'What is that?' It doesn't work. And I think for me, [as] a fan — Yngwie, I think he's a brilliant guitar player — it's just not working anymore. He's gone into a weird direction here. You can't tell people sometimes, though. What are you gonna do?"