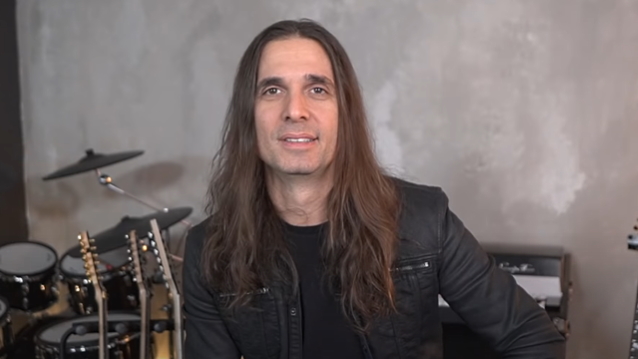 MEGADETH's Brazilian-born guitarist Kiko Loureiro has uploaded a new 14-minute video in which he answers a number of fan-submitted questions. You can now watch the question-and-answer session below.

Asked if he has learned anything from playing with MEGADETH leader Dave Mustaine for the past six years, Kiko said (as transcribed by BLABBERMOUTH.NET): "Oh, yes, man. Oh, yes. I don't know if you're asking about guitar stuff, but I think my answer would go more, like… I learned watching him strive to be unstoppable, to be strong, to search for excellence, to demand excellence from everyone, and everyone delivers excellence, delivers their best. Leadership… What else? I don't know… Fight for your case. Fight for your music. Fight for your band. Fight for your fans. Being an artist, being creative [and] combining all those things — being professional and at the same time creative and at the same time having fun while you're doing the stuff. Yeah, a lot of experience in the music business as well — in the music business in general, in the show biz.

"And regarding guitar as well, the thrash metal essence," he continued. "All the rhythms — mainly the rhythms and then the attitude and the force, the vibe, the drive, the intensity. So, all those things while you're playing. Mixing the technical things with a lot of energy — like metal with punk with attitude. I think I'm a way better rhythm player because of just hanging and playing with Dave for all those years — since 2015. Also composing — he composes in a very different way than I do. And I think watching and learning from the way he does as well.

"So, yeah, a lot of stuff," Kiko added. "I could do an entire video of things that I learned from Dave and from the whole MEGADETH experience."

In an October 2015 interview with The Irish Sun, Mustaine was full of praise for Loureiro, saying: "A lot of times guitarists won't know how to add to something — they'll put something in there that's kind of like tits on a bull, unnecessary. Kiko came in and immediately started making some really good suggestions that we applied [to MEGADETH's 2016 album, 'Dystopia']. When he first came in, I knew he had the ability but I didn't know if the songwriting technique and talent was going to show up this early on."

He continued: "What was great about the suggestions that Kiko made was that they weren't just guitar ones — he made a bass part in a song called 'Me Hate You' [that made it] really come along. In fact, that was one of the songs where he made a huge melodic contribution in the chorus and I said, 'Man, this sounds like something.'"

According to Dave, Kiko possesses all the elements that are required to become part of a legendary metal act like MEGADETH.

He continued: "I found with Kiko, his ability was astronomical, with his attitude he was very confident in what he did — there's a difference between confidence and arrogance. In appearance, he was very classy and very subdued on the street, but up on stage he totally takes command of his performance. When he came up to Nashville to visit with me, I didn't even have him play for the majority of the day he was there. I just wanted to hang out with him and it's been a really long time since I hung out with a guitar player before I hired him. Usually I would listen to how he played and then I'd go, 'Okay, we'll work it out.' I didn't want to do that again. Hanging out with Kiko, and having lunch and kicking back and talking music was all I needed — I knew he was the right guy."

MEGADETH recently completed work on its new album, "The Sick, The Dying And The Dead", for a tentative early 2022 release.

Mustaine has yet to reveal who played bass on the new MEGADETH album after David Ellefson's tracks were removed from the LP following his dismissal from the band in late May.

MEGADETH recently completed "The Metal Tour Of The Year" with LAMB OF GOD, TRIVIUM and HATEBREED.

For "The Metal Tour Of The Year", MEGADETH was rejoined by bassist James LoMenzo for the first time in nearly 12 years.

LoMenzo joined MEGADETH in 2006 and appeared on two of the group's studio albums, 2007's "United Abominations" and 2009's "Endgame". He was fired from the band in 2010 and replaced with a returning Ellefson.