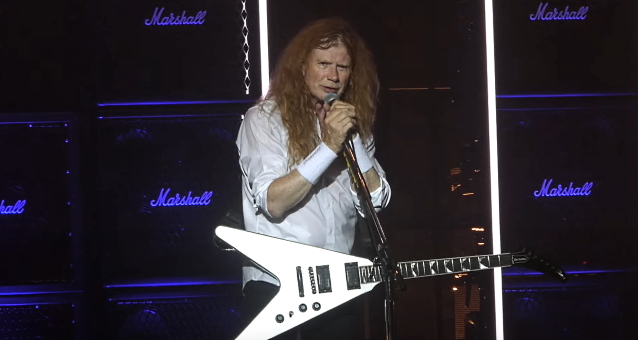 MEGADETH's Dave Mustaine has spoken out against "tyranny in the schools" and "in the medical business."

The 60-year-old musician, who has attracted a fair amount of media attention over the years for his political thoughts, addressed what he feels is an unreasonable use of power during last night's (Wednesday, September 15) MEGADETH concert in Camden, New Jersey.

Speaking to the crowd before the final song of the night, "Holy Wars... The Punishment Due", Mustaine said: "I just wanna tell you how great it is. Look around you, guys. Look to your right, look to your left, and look how wonderful this is. We're all here together. We're not freaking out, and we're not yelling at people, 'Wear your fucking mask.'

"Listen, it starts with this kind of a sensation that we build right now," he continued. "We feel together, we feel like [there's] strength in numbers. We feel like we are invincible. People will not be able to stop us.

"Right now, what's going on is tyranny. This is called tyranny. Look it up when you get home. And tyranny isn't only in government. Tyranny right now is in the schools and tyranny is in the medical business.

"If you look what happened in the Middle East right now… I said it a long time ago with this next song, 'Holy Wars'."

A little over two years ago, Dave said that he and other public figures have fallen victim to so-called negative partisanship, in which people identify as being against the opposing political party, and vocalize their beliefs through anger or loathing.

"I've got this reputation that I'm a right-winger," Mustaine told Ron Keel of the "Streets Of Rock 'N' Roll" radio show. "Well, check my voting record to see that I've voted Democrat and Republican. And it's just a shame that people are trying to destroy people's careers because of a vote."

Mustaine has consistently denied that he is a Republican, telling Artisan News in a 2012 interview: "I'm an independent, not a Republican — I've never been a Republican. I've always said that. I don't belong to any party — I'm non-partisan. And for me, the sad thing is, instead of voting for the best man, I have to vote for the lesser of two evils."

Back in 2016, Mustaine refused to say if was going to vote for Donald Trump in that year's U.S. presidential election but called the billionaire real estate mogul "a very successful businessman." He also said that he wouldn't vote for Hillary Clinton.

Four years earlier, Mustaine made headlines when he voiced his support for ultraconservative Republican presidential candidate Rick Santorum. He explained at the time that the Pennsylvania politician looked "like he could be a really cool president… kind of like a JFK kind of guy." That same year, he drew ire on social media when he suggested onstage at a concert in Singapore that President Obama was behind the mass shootings in Aurora and at a Sikh temple in Wisconsin.

Mustaine later blamed media outlets for taking his statements out of context, explaining that he never said he officially "endorsed" Santorum. As for the Singapore concert, he claimed to have been repeating the theories of Larry Pratt, a pro-gun activist who runs the organization Gun Owners Of America.

Also in 2012, Mustaine revealed his "birther" opinions on a talk show, saying he doubted President Obama was born in the United States. He told radio host Alex Jones: "With all of the proof about his birth certificate being fake… And you see the signs in Kenya that say 'the birthplace of Barack Obama.' Hello?! C'mon, guys. How stupid are we right now?"

In October 2011, as Occupy Wall Street protests were raging across the country, Mustaine railed against what he saw as the president's inappropriate support for the populist movement, calling Obama the most divisive president we've ever had. "I've never, in my 50 years of being alive, listened to an American president try and turn one class of people against another class of people," he said. "I've never — never — heard a president say, 'Go down and join the protesters down at Wall Street,' knowing that there are Nazis down there, knowing that there are people down there who are trust-fund babies, that are super, super wealthy and they're going down there and pretending that they really care; they just wanna be part of the 'movement.'"