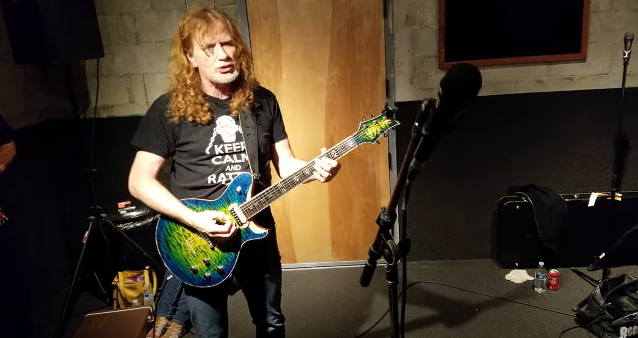 Video footage of MEGADETH's Dave Mustaine teaching you how to play the band's classic song "Symphony Of Destruction" can be seen below. The clip was apparently filmed at the April 2018 edition of the Rock 'N' Roll Fantasy Camp in Los Angeles, California but was only now uploaded to YouTube (courtesy of registered user "HYPERSONICCHAOS HYPERSONICCHAOS").

Rock 'N' Roll Fantasy Camp is a non-competitive atmosphere designed for all levels of musicians and music enthusiasts. Participants are placed in bands with like-minded people and skill level to make for an off-the-charts experience.

Some of the campers play well and even gave up careers as musicians to become CEOs and lawyers. Some campers can't play at all. What they all have in common is passion for rock music. At Rock 'N' Roll Fantasy Camp, they all get to pursue their passion — and meet, and play with the artists who became the soundtrack of their lives.

Earlier this week, MEGADETH commented on speculation surrounding bassist David Ellefson's intimate involvement in communications with a woman other than his wife.

Last weekend, sexually tinged messages and explicit video footage involving the 56-year-old musician were leaked on Twitter. Ellefson later released a statement on Instagram denying all social media chatter that he "groomed" an underage fan. The woman in question also confirmed in her own post that the video calls between them did take place, but that she was the one to initiate them and that she was never underage when they happened.

On Monday, MEGADETH said that it was "aware of the recent statements regarding David Ellefson" and indicated that it was "watching developments closely." The band added: "As it relates to creativity and business, we are all familiar with one another. However, there are clearly aspects of David's private life that he has kept to himself. As this situation unfolds, it is important that all voices be heard clearly and respectfully. We look forward to the truth coming to light."

David, who became a Lutheran pastor nearly a decade ago, and his wife Julie Ellefson have been married for 27 years. They have two children, Roman Alexander (25) and Athena Grace (22).