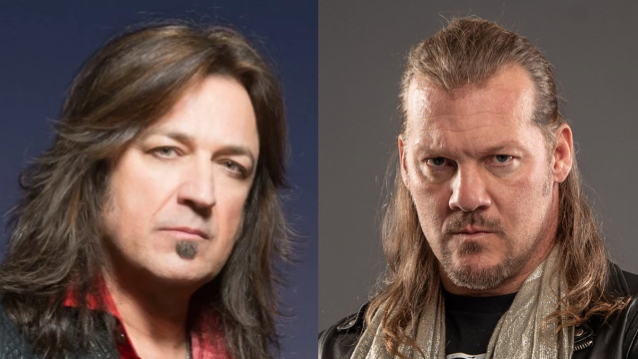 STRYPER's Michael Sweet and FOZZY's Chris Jericho have criticized a U.S. Congressman's "light-hearted" attempt to be inclusive on Sunday, when he wrapped up a prayer in the House of Representatives with the words "Amen and awomen," saying it was "a perfect example of going way too far."

Missouri Rep. Emanuel Cleaver, a United Methodist pastor from Kansas City, delivered the opening prayer for the 117th Congress and ended it by saying, "We ask it in the name of the monotheistic God, Brahma, and 'god' known by many names, by many different faiths. Amen and awoman."

The word "Amen" comes from the Hebrew language, in which it means "certainty," "truth" and "so be it," according to the etymology explained in various dictionaries.

Earlier today, Sweet took to his Instagram to share the headline "Democrat's opening prayer ends with 'amen and a-woman'', and he included the following message: "As we should fight for ALL rights and respect ALL people, we should also respect the dictionary.

"'Amen' has nothing to do with gender, it simply means 'so be it'. That's the definition.

"Adding 'a-women' to the end of a prayer is a perfect example of going way too far. What do you think?"

A number of people weighed in with their opinions, including Jericho, who wrote simply: "Agreed".

Several Republican lawmakers took to Twitter to slam Cleaver for the ending, with one calling Cleaver's prayer "Political Correctness gone way off the rails." Former Speaker of the House Newt Gingrich called it "radical madness," while Donald Trump, Jr. poked fun at the episode, tweeting, "Awoman, Amen, and a Priest Walk into a bar..."

Cleaver told Snopes the pun was meant to underscore the fact that there is a record number of women serving in the new Congress and a first female chaplain of the House of Representatives.

"I am deeply disappointed that my prayer has been misinterpreted and misconstrued by some to fit a narrative that stokes resentment and greater division among portions of our population," he said in a statement. "I believe prayers to be a personal conversation between El Shaddai and the invocator. With this conversation, in the presence of the 117th House of Representatives, I concluded with a light-hearted pun in recognition of the record number of women who will be representing the American people in Congress during this term as well as in recognition of the first female Chaplain of the House of Representatives whose service commenced this week. I personally find these historic occasions to be blessings from God for which I am grateful.

"Rather than reflecting on my faithful requests for community healing and reversion from our increasingly tribal tendencies, it appears that some have latched on to the final word of this conversation in an attempt to twist my message to God and demean me personally," he continued. "In doing so, they have proven one point of my greater message — that we are all 'soiled by selfishness, perverted by prejudice and inveigled by ideology…'"