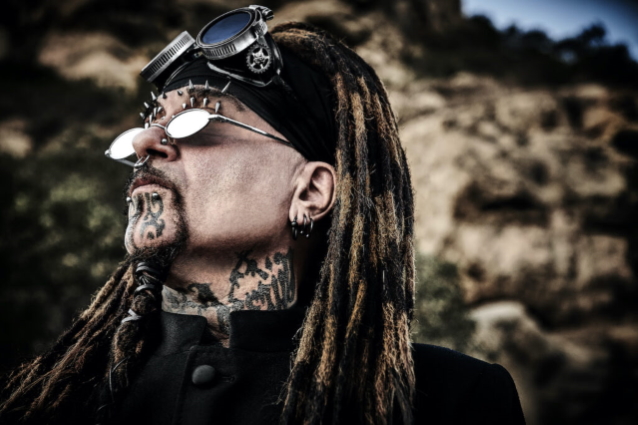 In a new interview with Higgo of "Distortion", which airs on Australia's Triple M Hard N Heavy Radio, MINISTRY mainman Al Jourgensen spoke about how the Donald Trump presidency inspired some of the lyrics on the band's upcoming album, "Moral Hygiene", as well as its predecessor, 2018's "AmeriKKKant". He said (as transcribed by BLABBERMOUTH.NET): "I just hold a mirror up, and I would be remiss not [to include him on the record]. Everyone's going, 'He's not in the office anymore. Why do you have to still make fun of him?' Well, no, that's what I lived through for four years. As a matter of fact, I had to really restrain myself on both the last album and this album on not having him in every song, showing the complete grift and greed and corruption and manipulation of that administration. It made George Bush Junior look like kindergarten. This was something that — it was a test of democracy, of people's right to vote, everything, which is still going on in the aftermath or the afterbirth of the 'orange goblin.' But I had to, because it was such a large part of the last four years of our lives. Not only in America — we were inundated, but you got his tweets there, because it's all a global social media now. So I thought I'd be remiss not to at least give him a guest appearance."

However, Jourgensen was quick to point out that Trump is "not the only problem" America has had to deal with in the last few years. "He's the cancerous mole that comes through the skin, but the cancer is still underneath, and that's basically what I try and point out," he explained. "Yeah, he's an unfortunate circumstance. As a matter of fact, it may be good in the long run for the prognosis of seeing the mole that just sprouts up or a boil. You go to the doctor and then you find out you have cancer. Before it was just a mole, but the doctor tells you it's much more than just a mole. There you go. So he's just kind of representative of the sickness that we have on the planet right now."

Al went on to say that Trump "didn't cause" division and hatred in America, but he "certainly highlighted it" by opening the floodgates for all of the heretofore closeted bigots to stream out into the open. "People came out from under their rocks," Jourgensen said. "At least [in the past] racism was behind closed doors in an alleyway. He brought it out into the open. But that's not him. Trump's not smart enough to do that. This was straight out of the Russian playbook, the KGB playbook of divide and conquer. If you don't like capitalism, then make it eat itself. We don't have to take it over. Instead of spending three trillion dollars on a nuclear war and wiping out half the planet, we can spend a couple of million dollars on a corrupt politician and buy some Russian bots to take over the Internet and feed false information. So they got more bang for buck as far as this war."

He continued: "This is a war — let's be clear, this is a war — and they've won the war. They have won lock, stock and barrel. They fought a war and won for probably less than five hundred million dollars. We spent how many trillions in Afghanistan and Iraq using force issues. They use social media and some corrupt bribes. Half our senators are bribed. So they got what they wanted. They won. But you know what? I just think that people, if you deprive them of freedom for long enough and they wake up one day and they realize, 'This sucks.' I don't care how many secret police you have or how many surveillance objects you have. It's the same thing. That's why I think democracy will win in the end, but it's a bumpy road, man."

"Moral Hygiene" is due on October 1 via Nuclear Blast Records. The LP was recorded with engineer Michael Rozon (also behind the boards on "AmeriKKKant") at Scheisse Dog Studio, Jourgensen's self-built home studio and creative lab. As with all MINISTRY albums, all songs are written and performed by Jourgensen.