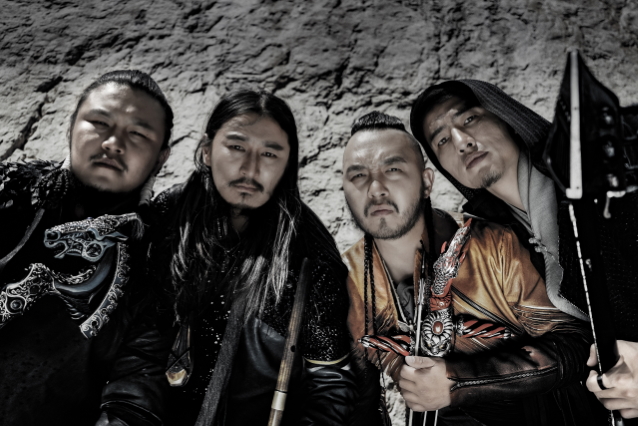 Alongside the deluxe album THE HU has shared a special film, "The Hu: Road To The Gereg", looking back at the making of "The Gereg", features and accomplishments along the way, plus unseen behind-the-scenes footage from tour life, video sets and live performances. The special also includes narrative from the band and collaborators on their music, Mongolian culture and the evolution of THE HU's customized traditional instruments, symbolism and presentation.

There are also three acoustic tracks on the deluxe release: "Shoog Shoog", "Yuve Yuve Yu" and "Shireg Shireg". The enchanting video for "Shireg Shireg" dropped on July 2, showing behind-the-scenes clips of THE HU in the studio, offering fans a real insight into their recording process and a closer look at their gorgeous traditional instruments.

Last week, THE HU put on a televised charity concert, filmed in the White Rock Centre in Ulaanbaatar, Mongolia. Through broadcast on Mongolian TV and their YouTube/Facebook pages, THE HU raised tens of thousands of dollars for the Mongolian COVID-19 relief. The concert was also the band's homecoming show after their sold-out world tour. THE HU was stuck in Australia for months when its world tour was cut short by the pandemic, but THE HU are a voice of courage, resilience and unity and they supported each other, even using their time in Australia to start working on their second album. Therefore, it was really important to them to give back, and have this concert to help those in Mongolia affected by the pandemic.

THE HU stands for the Mongolian root word for human being, inspiring the band's original style of music that it calls "Hunnu Rock." The group pulls inspiration from the Hunnu, an ancient Mongolian empire better known as The Huns in western culture. Their music is deeply embedded with their ancient culture, even integrating old Mongolian war cries and poetry into their lyrics.

The group was founded in 2016 in Ulaanbaatar, Mongolia by their producer Dashka, along with band members Gala, Jaya, Temka and Enkush. Together they create rock music with traditional Mongolian instrumentation such as the morin khuur (horsehead fiddle), tovshuur (Mongolian guitar), tumur khuur (jaw harp), guttural throat singing built around the pillars of heavy rock: distorted guitars, bombastic drums, and aggressive rhythms. All four members have earned Bachelor's or higher degrees in classical music and have gained several years of touring experience throughout Asia and the Pacific Rim.