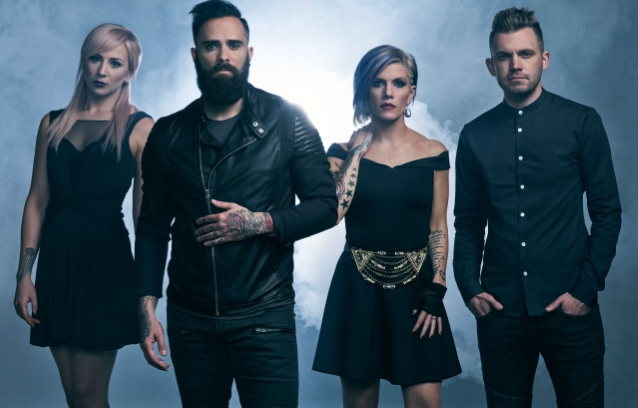 SKILLET frontman John Cooper, who is preparing to release the debut EP from his new metal side project FIGHT THE FURY, has told Consequence Of Sound in an interview this week that the next SKILLET album is on the way — but just delayed a bit. According to The Pulse Of Radio, Cooper explained: "As of seven weeks ago, we were supposed to be releasing a brand new SKILLET record in October. And six months before that, we had planned to release the new album this past January. Now, we're not going to release it until next year."

Saying that SKILLET's 10th studio effort is nearly done and will arrive next summer, Cooper was asked about its musical direction. He replied: "I do think the new album is going to be a bit heavier, but we're going to have those arena anthems and also some duets with Jen [Ledger, drummer] and me, which our fans love. I'm excited for it."

FIGHT THE FURY's EP, "Still Breathing", is due out on Friday (October 26), with Cooper describing it as heavier musically and lyrically than the faith-based SKILLET. He explained: "I've had tons of people on social media ask me, is this still Christian? I didn't expect anybody to ask that, but since SKILLET is Christian, that makes sense. I think that for me, FIGHT THE FURY is not a Christian band, but I want to be really clear to say that I'm still a Christian and my faith is very important to me."

The first single from "Still Breathing" is called "My Demons".

FIGHT THE FURY will tour Russia in December, while North American live plans are yet to be announced.