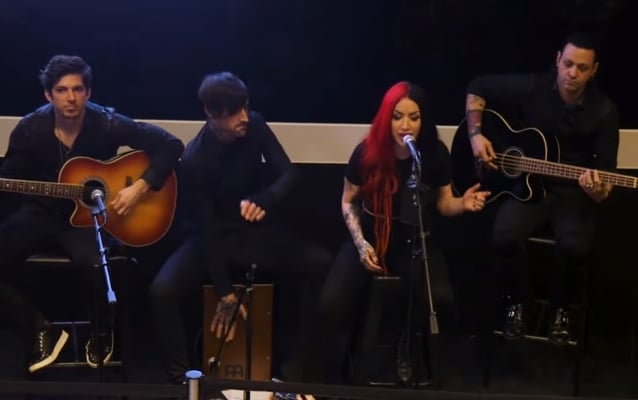 Video footage of NEW YEARS DAY performing an acoustic cover version of the PANTERA classic "Fucking Hostile" on February 7 at Sony Music Studios in New York City can be seen below.

NEW YEARS DAY previously recorded an electric rendition of "Fucking Hostile" for the "Diary Of A Creep" EP, which came out in January 2018. At the time, singer Ash Costello told Alternative Press that she first became a fan of PANTERA while she was still a teenager.

"When I was in high school, there were different groups of kids," she explained. "The goth kids. The ska kids. The punk kids. The metal kids. I had ins with all of them. The metal gang was all about the music. Every lunchtime, it was only about listening to each other’s favorite metal songs together at our table in the school quad. The bands we played ranged from IRON MAIDEN and MEGADETH to SLAYER and CRADLE OF FILTH. But one band really did it for me. Fucking PANTERA. The guitar riffs. The guitar tone. The songs' subject matter. The way they looked. Something about it just felt like mine. And above all the other songs, after all this time, 'Fucking Hostile' still makes every single one of my 'before I hit the stage' playlists. It has shaped a lot of my musical songwriting preferences, and it's what I base a lot of NEW YEARS DAY's music on."

NEW YEARS DAY will release its fourth studio album, "Unbreakable", on April 26 via RED Music. The follow-up to 2015's "Malevolence" was produced by Mitchell Marlow (ALL THAT REMAINS, IN THIS MOMENT, BUTCHER BABIES) and Scott Stevens (AMERICAN AUTHORS, HALESTORM, SHINEDOWN).

NEW YEARS DAY will hit the road this spring with FALLING IN REVERSE. The U.S. tour will kick off in Las Vegas on April 20 and will wrap on May 24 in Los Angeles.