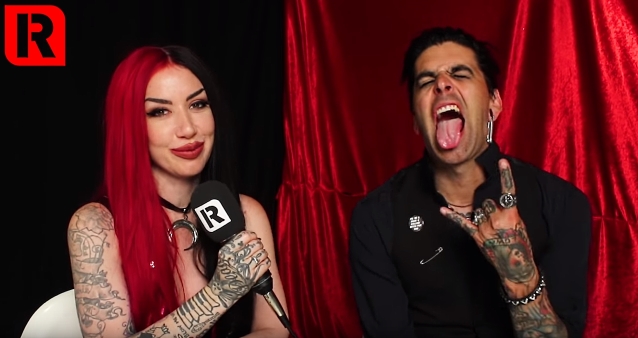 Vocalist Ash Costello and guitarist Nikki Misery of NEW YEARS DAY recently spoke with James Wilson-Taylor of the British magazine Rock Sound. The full conversation can be seen below. A few excerpts follow (as transcribed by BLABBERMOUTH.NET).

On the inspiration behind the title of the group's new album, "Unbreakable":

Ash: "I don't do do album artwork, album theme or album title until the album's written. I know this sounds very hippie at heart, but I like the album to kind of tell me what it wants to look like [and] tell me what it wants to be called. Once the songs were done and chosen, we put them in order, or at least the order we thought would be a good start, and then kind of listened to the message and what it's saying. It was very obvious right away — I was, like, 'Unbreakable'. It told me."

On the album's more "pop-metal" direction:

Ash: "It came very early in the writing process. I had requested to work with more pop writers and metal writers, because in the past, we had never written with pop writers. I wanted to experiment. I wanted to write the kind of music that I was desiring to listen to. I love heavy metal music, but sometimes the vocals leave a lot to be desired for me. I wanted something very melodic and very catchy and very uplifting while the music was the heavy part. I experimented until we kind of got the mixture right, like a recipe, and now I'm very happy with the result. It's exactly what I wanted."

On whether there were any artists from whom the band drew inspiration:

Nikki: "It's crazy — Kehlani and PANTERA was what we listened to a lot."

Ash: "I remember when we wrote 'Shut Up', I showed the producer I was writing with Kehlani's 'Crazy'. It's so literal, and it's so sassy and powerfully bitchy, and I loved it. He goes, 'Okay — got it. I'm feeling this.' 'Shut Up' happened that day, just like that."

On whether it was difficult to achieve the desired musical balance:

Ash: "There's a lot of songs that are on the cutting room floor. A lot of songs didn't make the record. I wouldn't know sometimes pretty early on in the song, or I'd let a song sit for a couple of weeks, and ten I got to the final say — 'Ehh, not feeling it. Next.' We just waited until it felt right."

On how the band evolved in the four years since the release of their previous album, "Malevolence":

Ash: "Around the time we were recording 'Malevolence' was the darkest time in my life, the band's life and all of our lives. For whatever reason, there was a lot of lessons that the world wanted to teach us at that time. It was a dark time period, [and] 'Malevolence' totally reflects that, but since then, we've had a lot of ups. We've built ourselves back up personally and as a band... We made it through it. We feel like we're stronger, better, happier than ever. That's why the album is reflecting that."

On comparing new song "Come For Me" to NO DOUBT's "Hollaback Girl":

Ash: "'Hollaback Girl' is fun, but it's a fight song. It's so bubbly and bouncy, but she's saying, 'Come fuckin' fight me...' I remember when we started to write that song, 'Hollaback Girl' was an inspiration, but actually, the song I played for the two writers that were with me at the time was [NO DOUBT's] 'Hella Good'. I said, 'I love this song. I love the structure of it.' It's one riff on repeat the entire song. That's how 'Come For Me' started. The guitar riff intro is the same guitar riff in the chorus, and that's what started getting the songwriting process going for that. I love its simplicity and its catchiness."

On how the band's new musical direction will be reflected in their live performances:

Ash: "It's going to be a mixture of headbanging and more theatrics. Less is more... I don't want to rely on headbanging through the whole set, so I'm trying to learn other things now... I feel like we've spent the past year being the support act, so we're really excited [about] upcoming headlining tours, to kind of stretch our legs and show what we have to offer as our own band and our own show."

"Unbreakable" will be released on April 26 via RED Music. The disc was produced by Mitchell Marlow (ALL THAT REMAINS, IN THIS MOMENT, BUTCHER BABIES) and Scott Stevens (AMERICAN AUTHORS, HALESTORM, SHINEDOWN).

The group kicks off a U.S. tour with FALLING IN REVERSE tonight (April 20) in Las Vegas, Nevada.