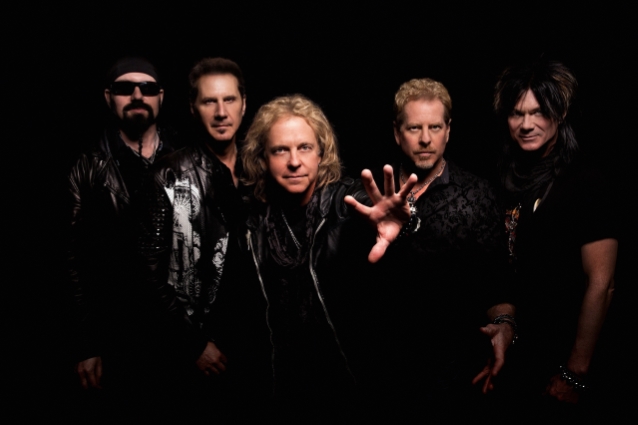 On what keeps the band motivated:

Jack: "I'm a musician. It's in my blood. This is what I do as a career. Brad [Gillis] and I and Lita Ford were in New York City, and we went to Les Paul's 90th birthday. I'm sitting there going, 'Man, this dude is 90 years old, and he's still up there playing and doing his thing. This is what I want to do. I've chosen this avenue in life, and I'm a musician — I'll just keep playing and rocking and rolling'... I think we're very fortunate that we're still a band, and we still all love to play. That's one thing people can say about a NIGHT RANGER show — when they come to our show, we don't sit up there and just turn one in. We're out there giving everything we have, because we absolutely love every minute of being on stage."

On the title of the group's latest album, "Don't Let Up":

Jack: "That basically says everything about us — that we're never going to let up, that we just keep going, and we're just going to keep rocking and rocking until somebody tells us we can't. So far, nobody's told us we can't."

On how his writing process has changed over the years:

Jack: "Songwriting is definitely a function of the more you do it, the better you get. You've just got to keep writing songs and songs and songs... You can't write a song anymore, where we are right now in 2018, like, 'Oh, baby, come on, give it to me.' Everybody would go, 'Creepy. That's a little creepy.' You've got to dig a little deeper and think about things, like our new single 'Truth'. It's a deep song. It's kind of a departure for NIGHT RANGER, but that's okay. At this stage of the game, after 36 years of releasing records and playing music and playing every stage in the world, basically, I think we have a right to be able to just get out there and do what we want, and do some different things. That's what we do, and we'll keep on doing that. Songwriting, for me, you look around your environment and see what's going on around you. I think that's a real important thing, and I think I'm more aware of that now than I ever was."

On whether he ever hopes to convey a certain "message" with his lyrics:

Jack: "There's nothing worse to me than a musician getting up on a soapbox and starting to lecture people. As far as I'm concerned, anybody who actually listens to a musician for their life's guidance is an idiot. Musicians are not known for being the most straight-ahead, I've-got-my-shit-together-type of person, so it's kind of funny. What does strike me is that [with] NIGHT RANGER, there has always been a positive sort of vibe. I think that's a reflection, and definitely a function of the way my outlook on life is, and what I got from my parents, my family. For me, the cup is always half full."

On the band's camaraderie:

Jack: "One time, we were playing a show with a very big band I shall not name. Their manager was in our dressing room, and we were getting ready to go on. We were laughing and joking and telling each other jokes. We were in hysterics, all five of us, just cracking up... As we're walking on, the manager's shaking his head behind me. I'm like, 'What?' He goes, 'I can't believe all you guys actually still like each other.' I started laughing and said, 'Yeah, man. That's the way it is.' He says, 'It's not with my band.' We have so much fun, the five of us. That's the way I want to keep it. As long as it's fun, I'm going to keep doing this thing. Once it stops being fun, then we'll stop, but right now, it's too much fun... I think that's the secret of — no pun — our success."

On the group's recent "Dawn Of Madness" show in Waukegan, Illinois:

Jack: "We had a special show — we played our entire 'Dawn Patrol' album and 'Midnight Madness' album in their entirety, and we're doing the same thing again in Denver. The fans, I think it was something that was so special for everybody. It was special for us, too, because there were songs that we played that I don't think we've ever played before live. It was really a fun experience. As long as we can keep doing things like that, I think we'll keep it interesting... That kind of stuff, it keeps everything interesting, keeps us on our toes and keeps the fans really enjoying the music."

Jack: "We're putting together a whole acoustic tour. NIGHT RANGER never did an MTV 'Unplugged', so we're going to put together a string of dates — a NIGHT RANGER 'Unplugged' string of dates, so we can just sit there with acoustic guitars and talk about the songs and tell stories and tell lies and bag on each other. It's going to be fun... Of course, there will be some new music next year. We're always going to be creating, because we believe when you stop creating, you start dying inside, so we're going to keep creating and creating and creating."

NIGHT RANGER released an acoustic live album, "24 Strings And A Drummer", in 2012. In addition to unplugged renditions of some of the group's biggest hits, the release included a cover of Don Henley's 1984 hit single "The Boys Of Summer".

"Don't Let Up" was released in March 2017 via Frontiers Music Srl.

NIGHT RANGER will play its second "Dawn Of Madness" show at Denver's Paramount Theatre on November 29.