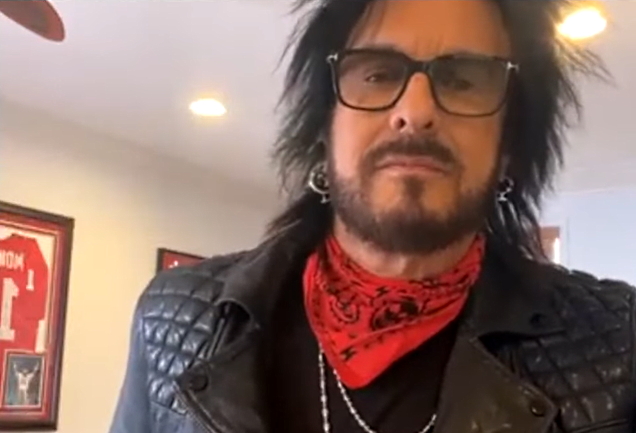 Fresh N' Lean, the number one ranked organic prepared meal delivery service in the United States, spoke to MÖTLEY CRÜE bassist Nikki Sixx about nutrition, his intense training regimen, and "The First 21: How I Became Nikki Sixx", his new book which looks back at his formative years.

On the topic of how he stays in good physical shape, Sixx said (as transcribed by BLABBERMOUTH.NET): "My family is naturally, a lot of them, overweight. I'm 195 pounds [and] six [feet] one [inch tall]. When I go into full cardio and light, medium weight, I'll go down to about 185, but actually put a little bit of weight on. So I have to work really hard. My body wants to go 200 — it wants to do that. And it's not necessarily for vanity reasons — I just don't operate well [at a heavier weight]; the machinery doesn't operate well; I don't think good; I don't sleep good. So health and exercise has become such a part of my life.

"I think back, even around [CRÜE's] 'Shout At The Devil' [album], I was drinking a lot of whisky back then, but I remember trying to get into sort of workout, training things to get ready for the tour," he continued. "'Cause it takes it out of you onstage. People come from everywhere to come see you play, and you just stand up there all tired with a beer belly. I mean, that's irresponsible. There's a million other bands that would like to have your job.

"[Exercise and health] has been a part of my life a lot," Nikki added. "And now I try to eat right and try to get enough sleep. One of the things I love is I have this Whoop app that I use that monitors my sleep. I used to have an Oura Ring. I try to keep an eye on all that stuff for my energy, because I'm constantly wanting to create stuff and then I'm gonna go on tour. So you can't go too far down the rabbit hole. I've gotta stay on top of it or it directly affects everything. And [when] you have a two-year-old [child], you get to the end of your day, and whether writing songs or doing interviews or being at work, and this little person needs your time, and I have four older children, and they need their time with their dad, and [spending] time with my wife and friends, you can't run out of energy. So the working out and the fuel is super important."

MÖTLEY CRÜE's "The Stadium Tour" was originally scheduled to take place in the summer of 2020 but ended up being pushed back to 2021, and then to 2022, due to the coronavirus pandemic.

In December 2019, CRÜE manager Allen Kovac told Fox Business that "some of" the bandmembers had enlisted outside help to get in shape for the trek. Kovac was referring to criticism of singer Vince Neil for his supposed diminished singing ability and weight gain, as well as the health status of guitarist Mick Mars, who has been dealing with a chronic form of arthritis that led him to undergo a hip replacement.

Kovac explained: "Some of them are working with a trainer, some of them are working with a nutritionist to make themselves the best they can be. The greatest insecurity for an artist is: Is anyone going to care about my music? Is anyone going to buy a ticket? We were in November [2019] when the discussions were happening, and these guys were already into regimens of how they get ready for a tour."

Speaking specifically about Neil, Kovac added: "Let's see what Vince sings like and looks like when the tour goes out." Sixx also said last year that Vince was "killing it" while working with "trainers" and "nutritionists" in preparation for "The Stadium Tour".

Last month, Vince revealed that he was trying out a new toning machine in an apparent effort to get in shape for "The Stadium Tour". The singer said he was using Emsculpt Neo, a revolutionary new treatment which supposedly builds muscle and reduces fat using both radio frequency and high-intensity electromagnetic energies.

Five months ago, Neil made headlines when he struggled to complete his solo concert at the Boone Iowa River Valley Festival in Boone. Based on fan-filmed video footage of the May 29 gig posted on YouTube, the 60-year-old rocker, who hadn't performed in more than a year and a half due to the COVID-19 pandemic, began losing his voice several songs into his set, which consisted exclusively of CRÜE classics and cover songs previously recorded by the band.