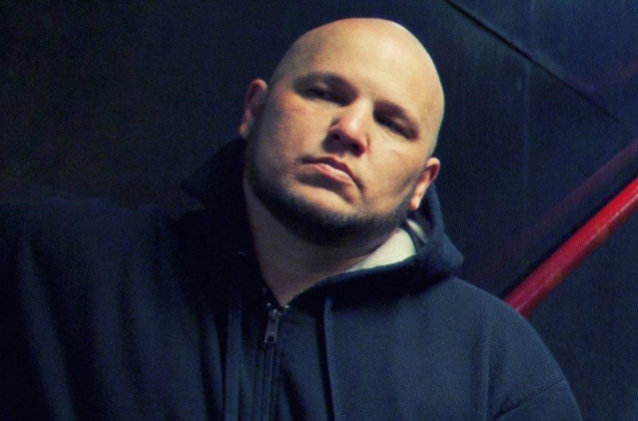 Shawn SixX of "The Liquid Conversations" conducted an interview with NONPOINT drummer Robb Rivera at a stop on the band's recent North American tour with P.O.D. You can listen to the entire chat via the SoundCloud widget below. A few excerpts follow (transcribed by BLABBERMOUTH.NET).

On how long he sees himself doing NONPOINT:

Robb: "I'm gonna be 49 this year. I've been doing it professionally since I was 30. Honestly, I do not know the answer to that question. I think if there's still demand for NONPOINT music, we'll continue. It's just gonna be a little less than before. Everybody's got families now, so it's not gonna be a 'tour, tour, tour, tour.' It's going to be a lot more chill. Like this year, we toured from April to the beginning of June. We had two months off, then [we did] August to September, [and then we had another] two months off. So we've been able to spread out our stuff, whereas before, it was just, like, nine months out of the year [on the road]."

On whether he considers himself an "adult" doing a job instead of a young guy playing music regardless of how little money he makes:

Robb: "I don't really consider myself an adult, per se. My wife can attest to that. I look at it as a day-by-day thing… I look at bands like, say a band like ANTHRAX, [who have been going] 35 years. They've been touring like crazy, and I think they're all in their 50s. Me and Elias [Soriano, vocals] made a pact. I remember we played in Rhode Island, Providence. We were in the dressing room and I said, 'Dude, you have my commitment. Always.' Does it get overwhelming? We deal with so much bullshit, and it just rips the soul out of what you love. We deal with so much crap. But at the end of the day, it's all about the shows. A perfect example, on this tour, we've had bus breakdowns — twice. We have another bus, thank god. It was the bus that we had on the last tour; it just wasn't available. We had to get in two rental vans and a U-Haul truck. We've done that twice. Driving all night. Shit like that just rips the soul out of you. And you deal with the industry side of things. You know what's really made this tour work — first off, the shows. Every single show we have done since we've left has been killer. Not one show has sucked. And the P.O.D. band and crew are just outstanding people."

On whether it's daunting for him to refer to NONPOINT and their contemporaries like P.O.D. as "old school":

Robb: "It's 'cause we come from that era. We come from the era of… I don't know how to explain it… There's just an incredible vibe with the two bands. We get along really well. No ego. No B.S. It's been just an outstanding tour when it comes to playing the shows and hanging out with them. All the other crap we dealt with is completely different, but it's been great."

On whether NONPOINT can enjoy the fruits of their labor while onstage:

Robb: "Well, we still go through the things — that's the thing. There's no 'easy' here. We're still struggling with so much crap. Like I said, the commitment the guys have with each other and the shows outweighs all the other stuff. I am completely annihilated exhausted right now. I'm so mentally tired. Because we just got here [for that night's show] late. We got here late today — not because of a breakdown, but because there's a DOT [Department Of Transportation] law on the bus where our bus has to be shut down for ten hours… It's been nothing but stress when it comes to logistics."

On what about NONPOINT's career he would go back and change:

Robb: "Decisions we've made in the past. We've learned. If I knew then what I know now, I would have been in such a different position in life — financially, mentally. 'Cause this industry can fuck definitely your health, mental health — it can definitely fuck with it — and it's fucked with mine… To me, it's a job. Whoever says it's not a job can kiss my ass right now, honestly. I don't give a fuck what you think — this is a fucking job. You come out here and do this. There's no 9-to-5 that can compare… Here's the thing, though: there's an advantage. If I had a 9-to-5 [job]… Your kids go to school. You see them, what? Maybe forty-five minutes to an hour in the morning? You come home [and you] see them for two hours. So you basically see your kids for three hours a day. Which, I understand, that's hard on the people who work 9-to-5. Like my sister-in-law, for example, she works in Chicago. She has to take a train to Chicago and she sees her daughter maybe two hours a day. It's tough for a mother. And I feel so bad for her. But when I'm in this position that I'm in, I'm home for two months all day long, so I get to see my kids more than the average father. Which, that I'm very thankful for… I've had so many people tell me, 'Ah, this is not a job.' And I said, 'You know what, dude? I don't have insurance. I don't have a sick day. I don't have vacations. I can't call in sick.' I have played with bronchitis, 103 fever. Everybody's played super sick, 'cause we have to. The only person that can't play with a cold is Elias, 'cause he has to sing. But even he, when sick, has gone up there and done it. He has to be really down for the count for him to cancel a show. But to tell me that this is not a job? Nah. I'm not giving you a pass on that."

On whether younger bands don't understand that being a full-time musician is "a job":

Robb: "I don't know if younger bands understand that. It's different. It's completely different what younger bands are doing [compared] to what we were doing. It's just a change of the times. I'm not gonna judge a younger band for what they do. I just worry about what I do. I don't care how other bands get presented. It's different. I come from a different era. A younger band now will never experience what I experienced. They won't experience records being sold. I experienced it. I actually had records that sold in stores. Younger bands have to deal with streaming. However it is that people get music, minimal records are being sold right now. And I feel bad, because, honestly, I wish the younger bands could experience going into a store and seeing that record on the shelf. Waiting in line, going in at midnight to buy that record. They just won't experience that. And that's just really sad, because there was nothing cooler [than] knowing your record was selling."

NONPOINT's tenth album, "X" was released in August. The follow-up to 2016's "The Poison Red" was produced by Fred Archambault, who has previously worked with ATREYU and AVENGED SEVENFOLD, among others.