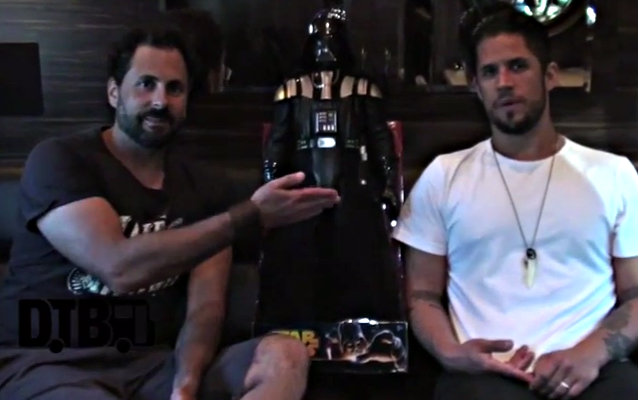 In the three-minute video below, PAPA ROACH bassist Tobin Esperance and drummer Tony Palermo share their top tips for being on tour (courtesy of Digital Tour Bus). The clip was shot on August 23, 2013 in Tinley Park, Illinois during the Carnival Of Madness tour with SHINEDOWN, SKILLET and IN THIS MOMENT.

PAPA ROACH's latest album, "The Connection", was re-released in Europe as a special tour edition in May 2013 via Eleven Seven Music. The effort contained a bonus DVD of a concert at Club Nokia in Los Angeles featuring performances of new songs as well as the band's biggest hits, including "Still Swingin'", "Give Me Back My Life", "Before I Die", "Last Resort" and "Between Angels & Insects".

"The Connection" was produced by rock veteran James Michael (SIXX: A.M., HALESTORM) and John Feldmann (PANIC AT THE DISCO, THE USED, BLACK VEIL BRIDES). The CD sold 22,000 copies in its first week of release to debut at No. 17 on the Billboard album chart.