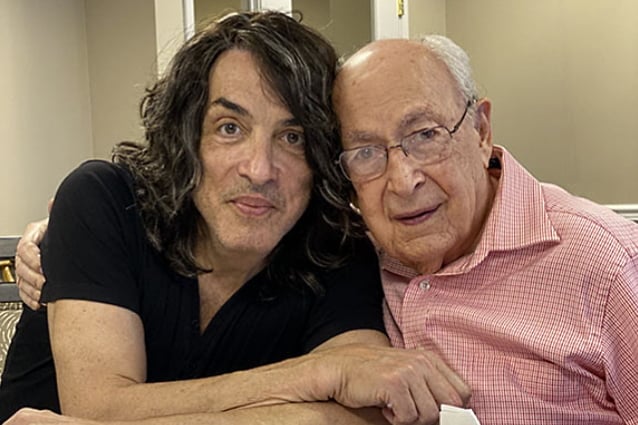 Paul Stanley's father has died at the age of 101.

The KISS frontman announced his father's passing in a social media post earlier today. He wrote: "My dad William Eisen has left this earth after 101 years & 7 months. His thirst for knowledge never wained. He could speak on virtually any subject. His pride in my accomplishments was heartwarming as was seeing his love of my family. He said he'd always be with me and he will."

In KISS's official authorized biography "Kiss: Behind The Mask", Stanley said that his father was born in the U.S. but "his parents were Russian-Hungarian-Polish."

Paul recalled: "My family wasn't that well off. When I was six, my father bought me a bike, which was the only thing that I was given of any value. We weren't affluent, but we survived. There were times when money was very tight. In Manhattan, the four of us lived in a one-bedroom apartment; my parents slept in the living room and my sister and I shared the bedroom. My father worked as a furniture salesman, and my mother was a teacher. Originally, she was a registered nurse, and then she taught retarded kids. Ultimately, she became a full-time housewife."

Stanley was born with a facial deformity, microtia, which prevented his right ear from forming properly and left him deaf on the right side. He later said that his parents had their own problems and did not acknowledge or provide support for Paul's difficulties.

Stanley said it took him decades into adulthood and plenty of therapy to help conquer his lack of self-esteem.

KISS kicked off its second farewell tour, dubbed "End Of The Road", in January 2019. The global trek is expected to wrap in early 2023.

My dad William Eisen has left this earth after 101 years & 7 months. His thirst for knowledge never wained. He could speak on virtually any subject. His pride in my accomplishments was heartwarming as was seeing his love of my family. He said he'd always be with me and he will. pic.twitter.com/uKWHP9Okax