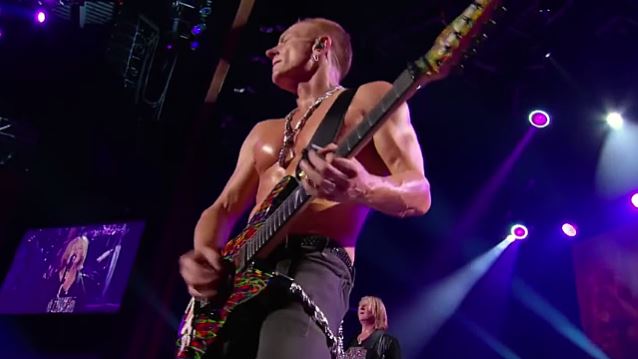 Canadian rock journalist Mitch Lafon of the "One On One With Mitch Lafon" podcast (Facebook page) recently conducted an interview with DEF LEPPARD guitarist Phil Collen. You can now listen to the chat using the Spreaker widget below. A couple of excerpts follow.

On when fans can expect to see the new DEF LEPPARD album released:

Phil: "We've gotta have it mixed and mastered and all that stuff first. But I think all the recording parts are done. Yeah, you know, we wanted to get it ready for the start of the tour, but that's not gonna happen. So it'll be out some time while we're on tour. I don't exactly know when, you know, so we'll just have to play that by ear."

On why DEF LEPPARD decided to go back into the studio and record a new album in the first place:

Phil: "Well, this was really interesting, actually. It's been, like, seven or eight years since the last studio album. And we went in and we said we're just gonna do, like, one or two songs — like an EP or something, or a single. And that first session, we came out with 12 songs. We've never done that. I think the approach was very different. We didn't really have anything to lose. We didn't have a record company or management or anyone breathing down our necks. We got some ideas, and they all worked. And the other thing, because of that… Normally, we'd go in and we'd always find ten reasons why to not do an idea as opposed to just going with it. And this was the first time we've ever just sat around and every idea got a fair shot, you know. Everyone was, like, 'Oh, that's cool. Let's try that.' There was no negative approach to it. So that's something we've never done before and it was so amazing. It blew me away that we got so many things done. And, honestly, I really think this is the best album we've done since 'Hysteria'."

On whether DEF LEPPARD was trying to go back to what the band was doing on "Hysteria" or "High 'N' Dry", or if it was just a natural progression:

Phil: "None of it. We'd just treat each song as kind of a different project. And what's another great thing about it is that we broke it up into three different parts. The initial one, we got the 12 songs, and pretty much, we played in the studio and we kind of played live and we got the essence of the songs down. And, again, [that's] something we don't normally do. And then we went back in May, just before the tour [with KISS]. And also, you have a different perspective on it. It sounds different. You change a few things. And we went back a third time and just kind of finished stuff off in January. And yeah, it's just amazing. I'm thrilled with how it turned out."

A recent advertisement for DEF LEPPARD's upcoming U.K. tour with WHITESNAKE revealed that DEF LEPPARD's eleventh album will be a self-titled affair.

DEF LEPPARD will return to the road April 15 for a Canadian tour, followed by Europe in May and June. A U.S. tour with STYX and TESLA will kick off June 23 in Tampa, Florida.