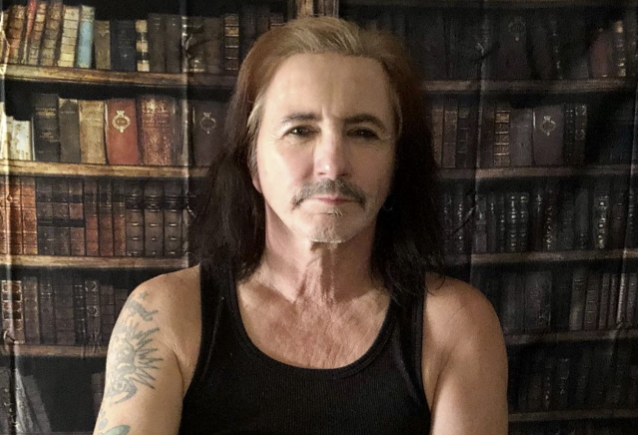 Phil Lewis has commented on the out-of-court resolution of the legal dispute over the rights to the L.A. GUNS name. Under the terms of the April 2021 settlement agreement, he and guitarist Tracii Guns will continue to operate under the L.A. GUNS trademark, while Steve Riley and his bandmates from the other version of L.A. GUNS will now operate under the new name RILEY'S L.A. GUNS.

Speaking to Jeff Gaudiosi of MisplacedStraws.com, the singer said: "Unfortunately, it required us going to court, spending a lot of money on lawyers. And it actually required him" — referring to Steve — "spending a lot of money on lawyers when he could have just been a gentleman about it in the first place and put his name to make it clear. But he was adamant in interviews, that he goes, 'No, we're not changing our name. Why should we? We've got every bit as right, as much right to it as they do.' And it was fucked up. And so it was necessary for us to spend a shitload of money to resolve this. Now it's resolved, I don't give a fuck. He can go out. It doesn't bother me as long as he's got that 'Riley' prefix and there's no confusion. 'Cause they were exploiting it, and it was put together to exploit confusion. It was put together for horrible, horrible reasons, and when you do something for all the wrong reasons, it rarely works out.

"Since the reunion [between Tracii and me], we've been on such a roll, and it was kind of fucked up that we had to stop and deal with that," Phil added. "But the pandemic actually worked in our favor, because it stopped both of us from playing. And it's resolved, and now we just move on."

RILEY'S L.A. GUNS features Riley alongside Orlando, Florida-based guitarist/vocalist Kurt Frohlich, bassist Kelly Nickels (a member of L.A. GUNS' "classic" incarnation) and guitarist Scott Griffin (who played bass for the band from 2007 until 2009, and then again from 2011 to 2014).

In January 2020, Riley was sued by Lewis and Guns in California District Court. Joining Riley as defendants in the case were the three musicians who performed in his rival version of L.A. GUNS; that group's manager, booking agent and merchandiser; and Golden Robot Records. The complaint, which requested a trial by jury, alleged that Riley's version of L.A. GUNS (referred to in the case docket as "the infringing L.A. GUNS") was creating "unfair competition" through its unauthorized usage of the L.A. GUNS trademark. In addition, Guns and Lewis were seeking relief from and/or against false advertising, breach of contract and unauthorized usage of their likenesses.

Back in May, Tracii told The SDR Show about the legal dispute with Riley: "We ended up settling in a way where, basically, [Steve] licenses the words L.A. GUNS for free; I'm not even asking for a percentage of when he plays. I'm just saying, 'Hey, I could have taken your house. I could have taken anything you own. But I don't want you to die in the street, and I don't want you to be poor.' And I really love his son, Cole. It just got to the point with all this litigation…

"I live in Denmark half the time, so when we did this thing called a mediation, that mediation started at 11 p.m. Denmark time, and it was nine hours," he continued. "And I just had a baby. And my wife and my baby were in the bedroom, and I'm in the living room, and this is our first apartment there, which is, like, 72 square meters — it's tiny. And I'm up, and I'm doing this mediation. And finally, it just got to the point where [we were] just going back and forth, and I'm, like, 'How can I easily make it just make sense?' 'Cause in the end, they had no argument. 'Well, I'm in L.A. GUNS.' That was the argument. No, you're not — you're not in L.A. GUNS. You were hired by me. The bass player guy was hired by me. And it's as simple as that. But if you wanna pretend that you came up with the name or you formed the band or it was your musical vision or that you even wrote one fucking song, you can go live in that fantasy, as long as it doesn't infringe on my business."