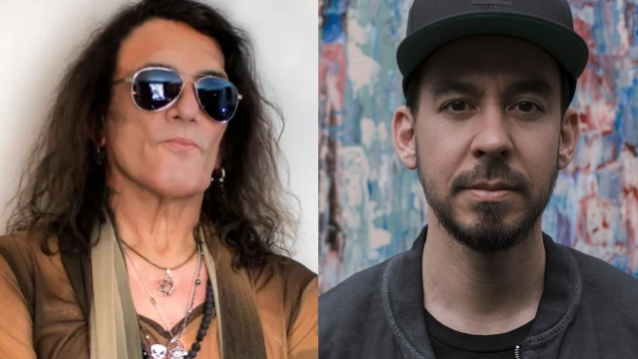 In a new interview with Metal Hammer magazine, LINKIN PARK's Mike Shinoda spoke about how the band's debut album, "Hybrid Theory", which celebrates its 20th anniversary this year, defied easy categorization and helped diversify metal's appeal beyond its core audience with its blend of hip-hop swagger, screaming, irresistible pop hooks and circuit-bending.

"At the time, if you asked somebody what they were listening to, they'd say... 'Rock. I listen to hip-hop. I listen to jazz,'" Shinoda said. "It wasn't until five years later they'd say, 'Everything.' 'Hybrid Theory' did some of that work. It was part of the progression towards breaking down boundaries between styles of music.

"I listened to 90% rap music, then I'd look at a lot of rock bands and I'd be like, 'There's something too white [about it],'" he continued. "That was one of the things that turned me off, especially hair metal. Hair metal felt like very white music, and I was growing up in a very diverse city, so I didn't gravitate to it. That didn't resonate with me. And it wasn't just about race. I don't mean the color of skin. I just mean the culture of it. When nu metal started at the very beginning, it was a very diverse place."

One musician who quickly reacted to Shinoda's comments is Stephen Pearcy, frontman for 1980s California rockers RATT, widely considered one of the most successful acts of the Sunset Strip glam metal scene. Pearcy tweeted out a link to Mike's "Hair metal felt like very white music" quote, and he included the following message: "Lol, Didnt know rock music had a race. wtf, I didn't know what hair metal felt like. Thanks. all music to me"

The term "hair metal" was coined in the late 1990s as a way to disparage acts thought to have been all flash and no substance. Its use became widespread after grunge gained popularity at the expense of 1980s metal.

This past July, former SKID ROW frontman Sebastian Bach took issue with being called "hair metal," saying that "being labeled something that I never set out to be labeled gets under my skin. It's a pain when people try to rewrite history," he tweeted. "Believe me none of us ever set out to be in a hair metal band that did not exist in the 80s".

That was not the first time Bach reacted negatively to the term "hair metal." In a 2012 interview with The New York Times, he famously said: "I am the man who put the hair in hair metal. I also headlined Broadway musicals. I acted in millions of TV shows. I didn't get to star in 'Jekyll And Hyde' on Broadway because of my haircut. My voice has gotten me everything in my life, not my hair."

Lol, Didnt know rock music had a race. wtf, I didn’t know what hair metal felt like. Thanks ?? all music to me☠️???‍☠‍??