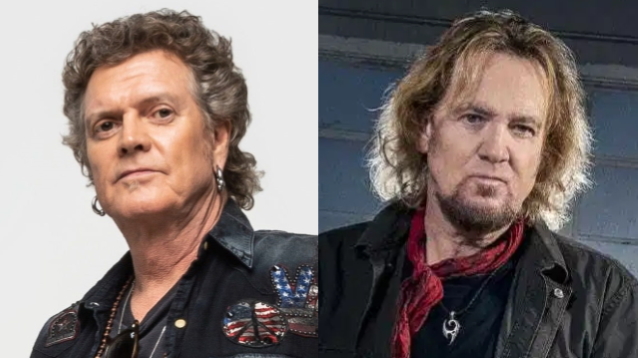 Rick Allen has confirmed that Adrian Smith was in contention to join DEF LEPPARD following the death of guitarist Steve Clarke in 1991, saying, "I actually really loved the idea." The drummer made the comment while speaking to Eonmusic about his upcoming in-person art shows at Wentworth Gallery in Atlantic City and King of Prussia on July 10 and July 11.

Confirming the long-rumored almost-collaboration in an August 2020 interview with Eonmusic, IRON MAIDEN guitarist Smith finally revealed that he was indeed in line for a spot with the multi-platinum act, in news that grabbed headlines around the world. And it's hardly surprising, for with bleached blonde hair, stonewashed denims, and a proven track record, the guitarist would have been a perfect shoo-in at the time to fill the vacant six-string slot.

In a brand new interview with Eonmusic, Allen confirmed that Smith had been on the LEPPARD radar for the role that was eventually landed by Vivian Campbell. The drummer then went on to name some of the other players who were under consideration, including an unknown Birmingham guitarist and the man who provided the licks on WHITESNAKE's colossal self-titled 1987 release. "There was a kid called Huwey Lucas that was a contender; there was John Sykes; there were all these people kind of lined up," he said.

However, it was Smith who impressed the drummer, with Rick praising Adrian for his ability to adapt.

"I loved the idea," Allen said. "It's interesting — you put somebody in a slightly different situation and new things are revealed about them, and it was cool. It was a compliment that he was so into it."

Concluding, however, Allen added: "But I think, ultimately, Vivian was the absolutely perfect choice."

Read the entire interview, where Rick discusses his artwork, his early playing technique, and some buried DEF LEPPARD gems, on Eonmusic.