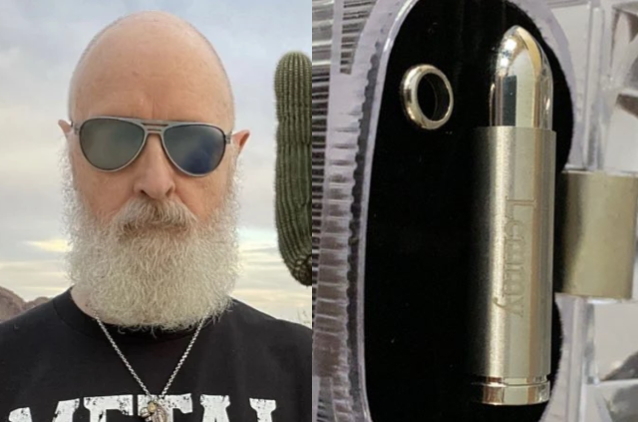 JUDAS PRIEST singer Rob Halford has confirmed to the "SpeedFreaks" radio show that he was one of several people who received a bullet from late MOTÖRHEAD frontman Ian "Lemmy" Kilmister as a personal gift. He said (as transcribed by BLABBERMOUTH.NET): "When Lemmy passed away, I had this beautiful opportunity to speak at his memorial. We had a great get-together; all of us musicians from all over the world, we met in Hollywood and we talked about Lemmy and his great life and the things that he's left us. And then, not too far back, I get something in the mail from the Lemmy people; Lemmy's office, his manager and everybody still work tirelessly to keep his name with us, as he always will be. They sent me — it's a bullet [laughs], it's a bullet with some of Lemmy's ashes inside of it."

He continued: "This is nuts. This is the kind of thing that Lemmy would have loved to have done. However you choose to interpret what I've just said, that's entirely up to you. But to be thought of, to be brought into this small circle of friends where you actually own a little bit of Lemmy's ashes and you wear it around your neck on a pendant and he's close to your heart in the truest sense in terms of his mortal remains, that's just mind-blowingly powerful. To use an object like that to carry his remains is just so Lemmy — it's provocative, it makes you think, it makes you talk. But as far as having a beautiful part of Lemmy physically with me right now in my house, that's just magical."

Halford's bullet is not the only one whose existence has been publicly revealed. Six months ago, German metal queen Doro Pesch confirmed she also got a bullet, saying she "almost dropped dead" after opening the package and realizing what it was. "It was, like, 'Wow,'" she said. "And then I heard that somebody said Lemmy wrote a list and he wanted his closest friends or family to have his ashes. And I've got this bullet right here. I had no words for it. It's pretty moving and touching. But in the letter, it said, 'He liked you a lot' or 'he loved you a lot,' and I thought, 'Oh, man. That feels so good.' That makes you feel like… Now I'm motivated for the next hundred years to do good and to rock the fans. That gave me so much love and so much energy."

Back in March, former "Headbangers Ball" host Riki Rachtman said that he was also mailed a bullet, calling it "the greatest gift I've ever received in my life." He added that he was "getting it made into a necklace so I can keep it on me everywhere I go." Last year, tennis player Pat Cash shared a photo of another Lemmy bullet, saying it had been gifted to UGLY KID JOE singer Whitfield Crane.

"#Lemmy (RIP) from #Motörhead asked that his ashes be put in some bullet and given out to his closest friends, last night one was presented to my mate #whitefieldCrane whilst we were having dinner at 'Lemmys bar' in 'The Rainbow'," Cash wrote on Instagram in February 2020.

Lemmy died in December 2015 at the age of 70 shortly after learning he had been diagnosed with cancer.

He had dealt with several health issues over the last few years of his life, including heart trouble, forcing him to cut back on his famous smoking habits.

MOTÖRHEAD had to cancel a number of shows in 2015 because of Lemmy's poor health, although the band did manage to complete one final European tour a couple of weeks before his death.

In June 2020, it was announced that Lemmy will get the biopic treatment. The upcoming film, "Lemmy", will be directed by Greg Olliver, who previously helmed the 2010 documentary of the same name, "Lemmy".

"Lemmy" will follow Kilmister's life growing up in Stoke-on-Trent, becoming a roadie for Jimi Hendrix and a member of seminal psychedelic rock band HAWKWIND before forming MOTÖRHEAD.

A custom-made urn containing Lemmy's ashes is on permanent display in a columbarium at Forest Lawn Cemetery in Hollywood, California.

Before his death #Lemmy asked for his ashes to be put in some bullets & handed out to his closest friends Today I received a bullet & was literally brought to tears Thank you @myMotorhead pic.twitter.com/gnI9aWe4iU