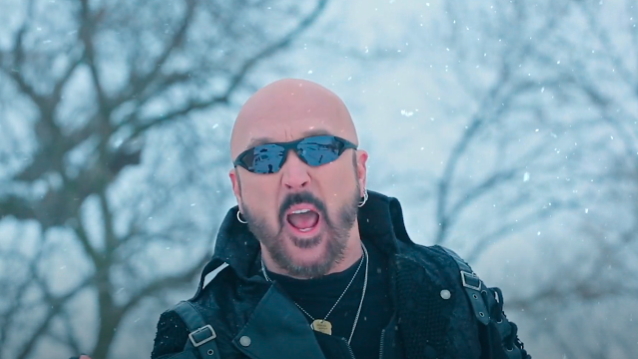 The official music video for the song "Die Young" from EMERALD SABBATH, the ambitious epic rock and classical music tribute to BLACK SABBATH, can be seen below.

In a recent interview with Canada's The Metal Voice, Keel spoke about the time he nearly joined BLACK SABBATH in 1984 while the legendary heavy metal act was looking for a replacement for Ian Gillan. He said: "It was an amazing experience. I was in the studio recording the KEEL demos, at Pasha Studios, where [producer] Spencer Proffer had recorded the QUIET RIOT 'Metal Health' album. And Spencer was the hot hand in Hollywood at the time — he was the guy — and he had signed on to produce the new SABBATH album after Ian Gillan left. Spencer had chosen me for the vocal position in SABBATH, and we cut a demo of some songs, and Tony [Iommi, SABBATH guitarist] and Geezer [Butler, SABBATH bassist] heard it. I signed a contract. I met with their management. I spent days with Tony and Geezer.

"Spencer Proffer, for whatever reason — ego, probably — was trying to turn BLACK SABBATH into an '80s 'hair' band, trying to push outside songs on them and make them into an MTV-type [band]," Ron revealed. "That's not SABBATH, man — SABBATH is who they are. They are the iconic founding fathers of heavy metal. You don't take SABBATH and turn them into an '80s 'hair' band like RATT or MÖTLEY CRÜE. Spencer was trying to do that at the time — not necessarily with me and my voice and my presence in the band, 'cause I think I would have been a good fit. And you can hear that on the tracks for the new EMERALD SABBATH album, which we just released, featuring former members of SABBATH coming together to create a BLACK SABBATH tribute record. And I was very fortunate that I was able to sing three songs on the record: an Ozzy [Osbourne] song, 'Hole In The Sky'; an Ian Gillan song, 'Trashed', off 'Born Again'; and I got to sing 'Die Young', the Ronnie James Dio classic from 'Heaven And Hell'. So I got to cover each one of those vocalists with guys like Rudy Sarzo on bass and Vinny Appice on bass.

"So, for me, the BLACK SABBATH story is never gonna be over; I get to talk about it in every interview, and I get to sing these iconic songs with some of the guys that are part of that SABBATH history," he added.

"My time with the band was very short. I am very thankful that KEEL survived that, 'cause that was right when we first put KEEL together, and I had to tell the guys in the band, 'Guys, I'm joining SABBATH, and I can't turn this opportunity down. This is the chance of a lifetime.' And the guys in my band understood it. We thought that April 7th, 1984 was gonna be our first and last show. But the deal fell apart. Spencer Proffer was fired. BLACK SABBATH said, 'Screw you. We're not having any of this. We're gonna do what SABBATH does.' And I got caught in the crossfire, 'cause Spencer was the guy who got me the gig. He was the producer of the project, and when he got fired, I got caught in the crossfire."

In his 2011 memoir, "Iron Man: My Journey Through Heaven And Hell With Black Sabbath", Iommi stated about Keel: "Ron actually did have a career [after he auditioned for SABBATH], because he's a good singer as well. He just wasn't what we were looking for at the time."

After a storied career that began as lead vocalist for STEELER, which would also go on to include guitar virtuoso Yngwie Malmsteen, and selling millions of records under his eponymous KEEL with classic albums "The Right To Rock" and "The Final Frontier" (both produced by KISS's Gene Simmons), Keel veered off into brave new territory with the decidedly southern rock/outlaw country feel of "Metal Cowboy".

Keel went on to form RON KEEL BAND, with a new powerhouse band featuring the best players the Midwest has to offer.