Rock And Roll Hall Of Famer and spirits trailblazer Sammy Hagar today announced plans for a four-concert tour of Texas with his supergroup THE CIRCLE, featuring Michael Anthony, the renowned bassist and fellow Rock And Roll Hall Of Fame inductee, who's played with Sammy for the past 30 years in bands including VAN HALEN and CHICKENFOOT; Jason Bonham, the acclaimed journeyman drummer; and Vic Johnson, Hagar's longtime guitar virtuoso. Hagar's "A Toast To Texas" tour is presented by Sammy's Beach Bar Cocktail Co., Hagar's first line of canned sparkling rum cocktails which are launching in the Lone Star State in step with the shows. "A Toast To Texas" tour kicks off Friday, December 3 in Fort Worth and stops in San Antonio, Saturday, December 4, Austin, Monday, December 6 and wraps in Houston on Wednesday, December 8. Tickets go on sale this Friday, October 22.

"We chose cool, smaller venues on this tour so we could throw a party like we do in Cabo," said Hagar. "It's about the whole experience, fans can sample my new Beach Bar Cocktail Co. sparkling rum cocktails, along with some Santo Tequila and Beach Bar Rum, while listening to THE CIRCLE jam. We'll be back next summer with the big rock shows, this is a party we're throwing just for Texas."

For more than four decades, Hagar has been recognized as one of the best and most accomplished lead singers and songwriters in rock music. From breaking into the industry with the seminal hard rock band MONTROSE to his multi-platinum solo career to his ride as the frontman of VAN HALEN, CHICKENFOOT and his latest supergroup THE CIRCLE, Hagar has amassed 25 platinum albums on sales surpassing 50 million worldwide. Along his journey, he has set the tone for some of the greatest rock anthems ever and earned the highest respect of the music industry with a Grammy Award and induction into the Rock And Roll Hall Of Fame.

At THE CIRCLE shows, fans will experience the legendary artists performing some of Hagar's greatest hits, spanning more than four decades, including songs like "I Can't Drive 55", "Dreams", "Your Love Is Driving Me Crazy", "Mas Tequila", "Why Can't This Be Love", "Right Now" and many more. 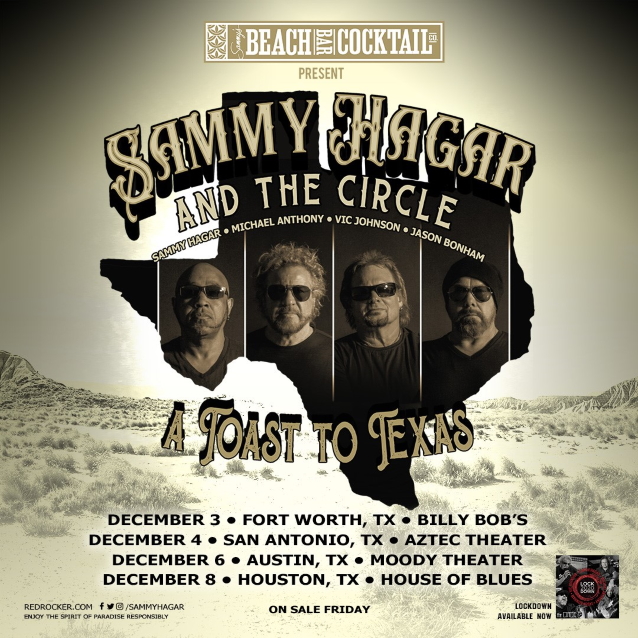