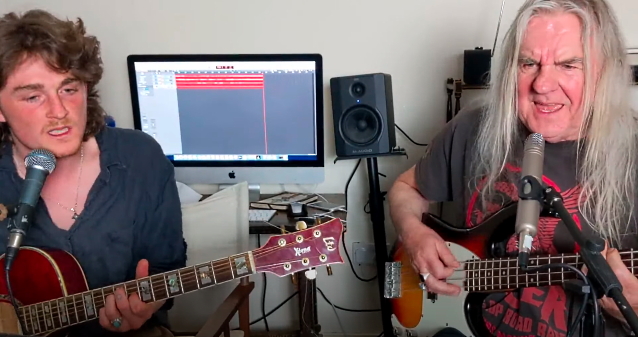 SAXON frontman Biff Byford recently teamed up with his son Seb (NAKED SIX) to perform a couple of songs acoustically as a special "thank you" to the band's fans all over the world, those who must go to work every day and those staying at home keeping everyone safe during this difficult time.

SAXON said in a statement: "We can't get on the road just yet, but we can still give you rock 'n' roll! Enjoy and keep safe!"

Video of Biff and Seb's performance — consisting of the songs "Black And White" (from Biff's first solo album, "School Of Hard Knocks") and "Outside Looking In" (from NAKED SIX's debut album, "Lost Art Of Conversation") — can be seen below. The set was recorded at their home whilst self-isolating during the COVID-19 international lockdown.

"School Of Hard Knocks" fulfills Byford's long-standing wish to explore rock 'n' roll a little more. The album is a personal journey highlighting his life and his passionate interests, from the history of the Middle Ages to growing up in the industrial North. A classic, masterfully constructed old-school British hard rock album, "School Of Hard Knocks" embraces a variety of musical genres.