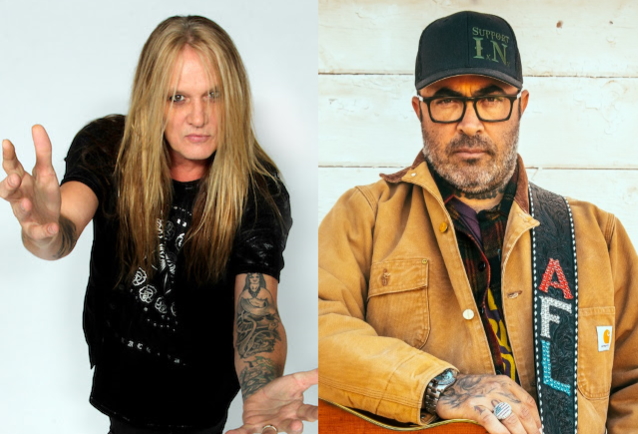 Sebastian Bach has blasted Aaron Lewis after the STAIND frontman urged his fans to chant "Fuck Joe Biden" during a concert in Pennsylvania.

Late last month, the outspoken conservative rocker, who also tours and records as a solo country artist, called on the crowd to follow him in the expletive-laden chant against the president while appearing with STAIND at The Pavilion at Montage Mountain in Scranton as part of the band's tour with KORN.

Bach, a vocal critic of Donald Trump who publicly supported Biden ahead of the 2020 presidential election, addressed Lewis's actions while speaking to Ultimate Classic Rock in a new interview. Without mentioning Aaron by name, Sebastian said (as transcribed by BLABBERMOUTH.NET): "I just think for any meathead ignorant musician that wants to get their crowd chanting 'Fuck Joe Biden', anybody who wants to do that, I can say fuck you and your band. And fuck the guy that came before Joe Biden, and I don't need to speak about him anymore.

"Joe Biden is an old man who has nothing but good intentions for the country," Bach continued. "And there's nothing to not like about him. He's trying his hardest to get us back to normal instead of the shit show that took away rock and roll from us in 2020 and our kids' school and everything that we know about America.

"Joe Biden has made America great again, and he's constantly under attack for no reason. For what reason?

"All I want is for things to go back to normal. I hope that happens. That's all I want. That's my only objective.

"As soon as Joe Biden was elected president, I never mentioned the other guy ever again. If you look at my Twitter, I flicked the switch. I go, 'I'm fucking done with that shit.' 'Cause that's not who I am. I'm not out to be having political headlines with my face next to 'em all the time."

Prior to the most recent presidential election, Bach had frequently criticized Trump's policies in interviews and on Twitter. In July 2020, he told Esquire that he missed "smarts" in the White House. "I can't watch footage of JFK from 1962," he said. "I can't even watch that shit because I'll cry. Because motherfucker is so cool and so smart and hates racism. And then we have this fucking jackass. And it's just not fair to the country. I put Barack Obama in the same category. When I watch him speak, it rips my heart out because he makes you feel safe."

Lewis is a frequent critic of the current president who has been wearing "Fuck Biden," "Impeach Biden" and "I could shit a better president" shirts while performing on stage in recent weeks.

Aaron's latest solo single, "Am I The Only One", takes aim at liberals and touches on American flags burning and statues that have been removed in the country.

Lewis, who is widely considered to be one of the most politically conservative musicians in rock, told the Anchorage Press in a January 2020 interview that he considered the first Trump impeachment by the House Of Representatives as the clearest representation of what's wrong with America these days.

In June, Lewis made headlines when he accused the U.S. Democratic Party of fighting against every major civil rights initiative and of having a long history of discrimination.