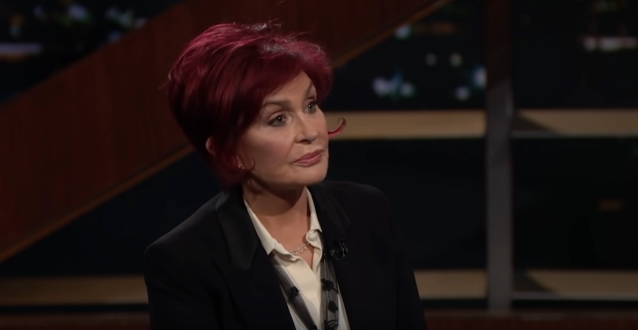 Sharon Osbourne says that she is "angry" and "hurt" over her exit from the CBS show "The Talk" following her emotional defense of pal Piers Morgan's criticism of Meghan Markle.

Ozzy Osbourne's wife and manager appeared on last night's episode of HBO's "Real Time With Bill Maher", where she defended herself over claims she was "racist" and blamed the controversy on not being able to keep up with changing acceptable norms of the "woke" language.

In the aforementioned episode of "The Talk", Osbourne and co-host Sheryl Underwood got into a heated debate about racism after Osbourne defended Morgan for his controversial comments about Duchess Meghan. During the exchange, Underwood got emotional to which Osbourne fired back at her, saying: "Don't try and cry because if anyone should be crying, it should be me."

Speaking with Maher, Osbourne said: "It's not fair, because it isn’t about being a racist. It's about maybe about not knowing what is correct and woke for your language that day, because it changes from day to day."

She added: "I've been called so many things in my life, I am so used to being called names, but a racist is one I will not take."

Sharon went on to question Prince Harry's own feelings about race and privilege. "You know when they say with white privilege? Right there with Harry. He's the poster boy," she told Maher. "He sits there and says daddy cut him off so he's not on the wages anymore and he was boo-hooing about it. You can't feel empathy for that because you are healthy, bright educated young man. You can go do whatever you want to do. Your life is your own."

Osbourne posted a public apology on March 12, tweeting that she felt "panicked" that people might think she was racist, so she "got defensive and allowed my fear and horror of being accused of being racist take over. There are very few things that hurt my heart more than racism so to feel associated with that spun me fast! I am not perfect, I am still learning like the rest of us and will continue to learn, listen and do better." She later claimed that she was blindsided by Underwood questioning her defense of Morgan and was not sufficiently prepared by showrunners and producers. She said she believed her co-hosts "had preparation, they had written questions for them."

CBS announced Sharon's departure from "The Talk" on March 26, writing in a statement that it completed an internal probe into the situation and "concluded that Sharon's behavior toward her co-hosts during the March 10 episode did not align with our values for a respectful workplace. We also did not find any evidence that CBS executives orchestrated the discussion or blindsided any of the hosts."

In the meantime, former "The Talk" co-host Holly Robinson Peete alleged that Osbourne had called her too "ghetto" to be on the show and responsible for her eventual ousting, claims Osbourne has denied. "Never in my life did I utter the words that Holly was 'too ghetto' to be on 'The Talk', as well as not having her fired," Osbourne tweeted. Fellow "The Talk" alum Leah Remini also claimed Ozzy's wife referred to Julie Chen, who is Chinese American, as a "wonton" and "slanty eyes," and called Sara Gilbert, who is a lesbian, a "pussy licker." Osbourne has denied all these claims and has said that she is "disappointed but unfazed and hardly surprised by the lies, the recasting of history and the bitterness coming out at this moment."