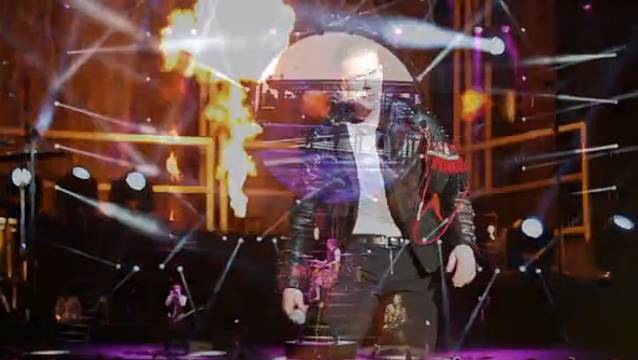 "Adrenaline", the video for the fifth single from SHINEDOWN's 20120 album "Amaryllis", can be seen at Billboard.com. The clip, which was filmed on the Carnival Of Madness tour earlier this year, was shot by Rob Fenn and it "showcases SHINEDOWN's penchant for a high-energy rock show, featuring both video and photo stills taken during the concerts," according to Billboard.com.

"We had the pleasure of having Mr. Rob Fenn on the Carnival Of Madness tour with us this summer," SHINEDOWN frontman Brent Smith said. "He was constantly filming, taking pictures, and documenting the reinvention of the tour.

"We had such an amazing time seeing all of our fans out on the road that we thought: what better way to present the video for our fifth single off of 'Amaryllis' than incorporating all the footage he captured? We hope the fans love it as much as we do."

SHINEDOWN is currently on the road in Europe with ALTER BRIDGE and HALESTORM.

Also on the agenda is the possible release of a collection of covers that the group has recorded, with SHINEDOWN guitarist Zach Myers telling Loudwire: "I'm not sure what's going down with that. Originally we were just going to release it on YouTube, which you don't need permission for, obviously, because people do covers on YouTube every day. But I believe fans really want it as a download . . . Now we're going to release it as an EP with just Brent and I. I believe it will come out during the holidays."

The Carnival Of Madness tour, which also features SKILLET, PAPA ROACH and others, finished up in Puyallup, Washington on September 18.