* with POP EVIL
^ with AYRON JONES

Last month, SHINEDOWN was forced to play two concerts as a three-piece after bassist Eric Bass tested positive for COVID-19. A month earlier, SHINEDOWN drummer Barry Kerch was forced to miss a few shows on the band's tour after testing positive for the novel coronavirus. He was temporarily replaced by Dustin Steinke of SIXX:A.M.

SHINEDOWN singer Brent Smith recently confirmed that the first single from the band's seventh studio album will arrive in January 2022. The follow-up to 2018's "Attention Attention" is being recorded at a new studio in Charleston, South Carolina spearheaded by Bass, who is the group's bassist and producer.

In September 2020, Smith told the KLOS radio show "Whiplash" that he and Bass were looking to make a more organic-sounding album this time around. "We've kind of proven that we can make these very large records, these very cinematic, orchestrated records with this wall of sound," he said. "What we wanna try to do with this album is we do want to hone it back down to drums, bass, guitar and vocals and the best songs that we can write and the freshest songs we can write with the most tenacity and the most ferociousness that we can express. So I don't think this time around we're going to necessarily look at the handbook of, 'Let's layer this record like we've layered other records, and let's keep adding to it so that it grows.' I think more the idea of big mono on this album, it's more about stereo and putting all of the sonics down the middle. But you don't have a hundred tracks on a song; you don't take a 22-piece orchestra and bring it in there. We've done that, and we've done those kinds of records, and we love those records, and we love that sound, but I think what we wanna do with this next record is we really want to focus on being a four-piece band, and let's see if we can peel the paint off of the walls with just the fury of the four of us in a room."

SHINEDOWN's film "Attention Attention", a cinematic experience of the band's 2018 studio album of the same name, premiered worldwide on September 3. Available on digital and cable VOD via Gravitas Ventures, "Attention Attention" is a visual journey that brings to life the story of SHINEDOWN's acclaimed chart-topping album, their sixth full-length, which debuted Top 5 on the Billboard 200, simultaneously hit No. 1 on Billboard's Alternative, Top Rock and Hard Rock Albums charts, and led to five iHeartRadio Music Award nominations. This sonic and visual work of art was directed by Bill Yukich (BEYONCÉ, METALLICA, WIZ KHALIFA) and features theatrical performances from the band, Melora Walters ("Magnolia", "Big Love", "PEN15"), and Francesca Eastwood ("Old", "Twin Peaks", "Fargo"), among others. 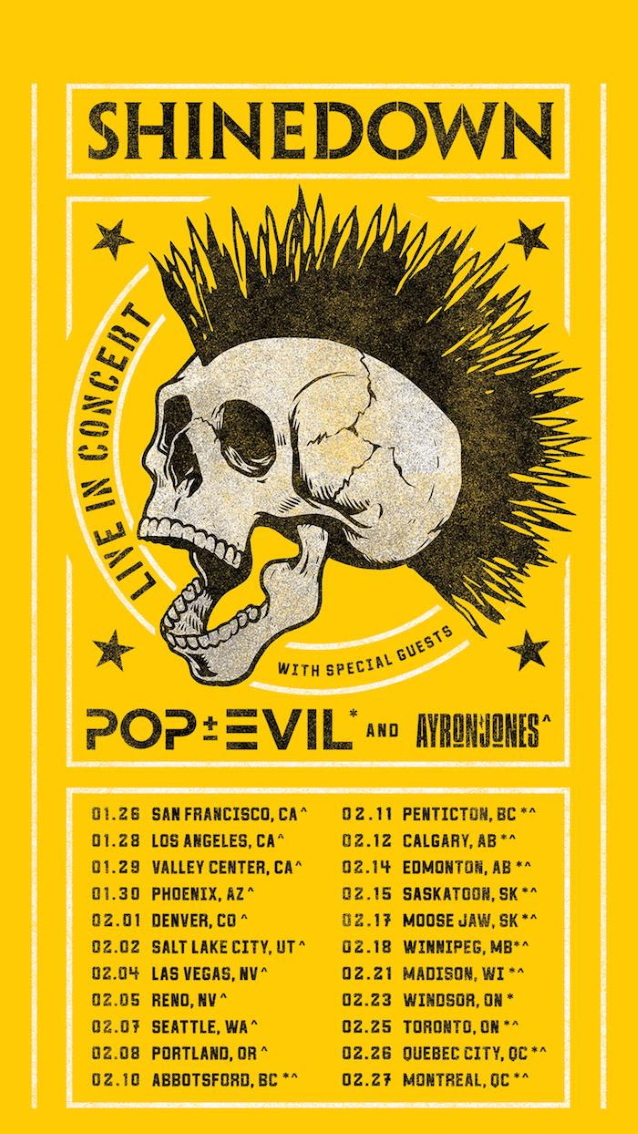