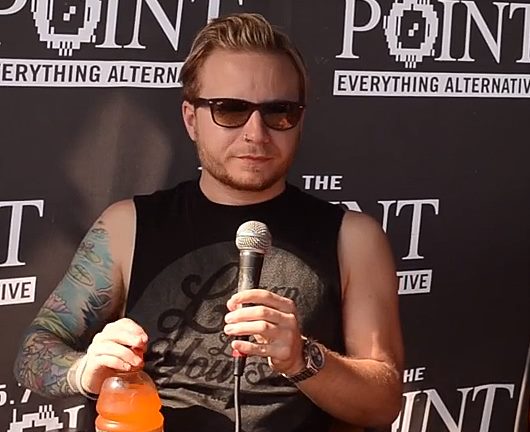 Ashley "Lux" Elzinga of the 105.7 The Point radio station in St. Louis, Missouri conducted an interview with SHINEDOWN guitarist Zach Myers. You can now watch the chat below.

According to The Pulse Of Radio, Loudwire asked Myers what SHINEDOWN has coming up next on its schedule after this summer's Carnival Of Madness tour. Myers said, "We're going to go home. Brent [Smith, frontman] has to rest his voice. He's not allowed to talk during the day right now. He's on vocal rest… We take these weeks off, then go to the U.K. We're only going to be there for eight days."

Also on the agenda is the possible release of a collection of covers that the group has recorded, with Myers saying, "I'm not sure what's going down with that. Originally we were just going to release it on YouTube, which you don't need permission for, obviously, because people do covers on YouTube every day. But I believe fans really want it as a download . . . Now we're going to release it as an EP with just Brent and I. I believe it will come out during the holidays."

The Carnival Of Madness tour, which also features SKILLET, PAPA ROACH and others, finished up in Puyallup, Washington on September 18.