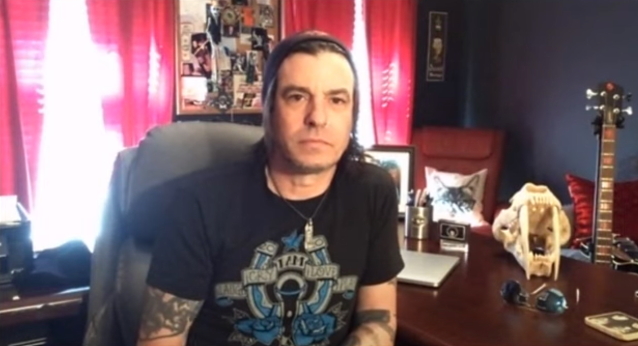 Earlier today (Friday, May 1), SKID ROW bassist Rachel Bolan spoke to We Are Hear's "Raise Your Horns With Lzzy Hale" — hosted by HALESTORM's Lzzy Hale — about how he is dealing with the coronavirus crisis and what the touring circuit might look like post-pandemic.

He said: "[SKID ROW] had this tour coming up, 'The Big Rock Summer Tour' [with RATT, Tom Keifer and SLAUGHTER], that now the first leg is being rescheduled — to when, we don't know yet. But our four trips to Europe have been officially pushed to 2021. They're getting rescheduled; a lot of the shows are rescheduled. It's the safe thing to do, it's the smart thing to do.

"You know how it is, man. You're doing your meet-and-greets, and you don't wanna cancel that because of this," he continued. "You don't want people standing 13 feet apart from each other at a show.

"It is what it is. And rock and roll's still gonna be there when all this weirdness is over."

Speaking about how quickly the touring industry will recover form the coronavirus crisis, Bolan said: "I think there's gonna be a huge adjustment period. And by huge, I don't mean long. I just mean everyone has to do it… There's a pecking order to where all the tours are gonna fall in and a priority to who's gonna get the venue when and which venues and this and that. So there's gonna be a big adjustment period, and people are gonna have to adjust their spending. And it's not gonna bounce back like that [snaps fingers, I don't think, any means. But I don't have a crystal ball; this is just solely my opinion. There's gonna be an adjustment period. People are gonna have to decide where they wanna go for entertainment — if they even have the money for the entertainment. A lot of people are hurt right now, and they're gonna have to make it up before they do anything. So we don't know what shows are gonna look like next year.

"When this first started happening, I was talking with a friend, and he's, like, 'I think when this is done, everyone's gonna just wanna get out of the house and stuff,' and I agree with him, but I don't think we were predicting how long this was gonna go on," he added. "So now people are being very detailed probably on where they're spending the money, and sometimes going out and having fun, unfortunately, is the last on the list — whether it's a concert or going to the movies or just going out to a bar with friends. But, that said, I think everything is gonna level off and even out, and it's just gonna take some time."

SKID ROW is continuing to work on the final chapter of the "United World Rebellion" trilogy, which will now tentatively be released in 2021. The disc is being tracked at a Nashville, Tennessee studio with producer Michael Wagener, who also helmed the group's 1989 self-titled debut and 1991's "Slave To The Grind".

SKID ROW's new disc will mark its first release with South African-born, British-based vocalist ZP Theart (DRAGONFORCE, TANK, I AM I), who joined the band in 2016 following the departure of Tony Harnell (TNT, STARBREAKER).