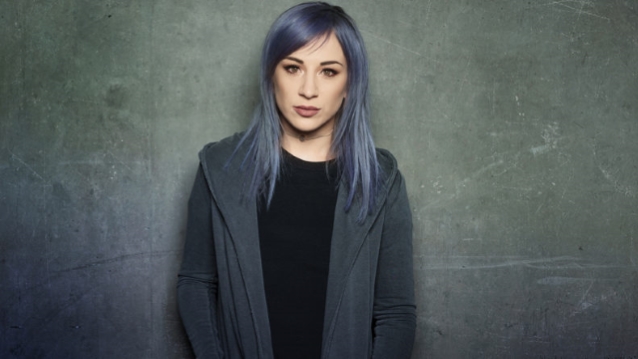 Drummer Jen Ledger of the Christian hard rock band SKILLET recently spoke with WAY Nation. The full conversation can be viewed below. A few excerpts follow (as transcribed by BLABBERMOUTH.NET).

On fronting her own group, LEDGER:

Jen: "Honestly, it was way more stretching than I thought it was going to be. I'm so used to being behind the drums in my own little world. I come out and sing a bit with SKILLET, so I thought, 'I've done this before. I've got some experience here. It should be fine.' But man, that first LEDGER show I did, I've never been more aware of my own limbs. I'm, like, 'What do I do with my arms and legs?' All of a sudden, everything feels unnatural. I wasn't expecting it to be that stretching, but there's such an art form to being a front person. Not only that, but between the songs, there's an awkward silence. It's awkward if I'm awkward, and it's not awkward if it's not awkward. All of a sudden, I'm realizing, 'Oh — it's uncomfortable because I'm uncomfortable.' It's given me mad respect for John Cooper from SKILLET, because I already knew he was a phenomenal front man, but now, stepping into it a little bit more... He's not phenomenal. He's legendary. He's so good — he always has the crowd eating out of the palm of his band, and he's got them laughing. It's talent, that is. I'm trying to follow in his footsteps and just enjoy myself up there the way he does, but it was a bit of a shock to the system for sure."

On deciding to write and release material outside of SKILLET:

Jen: "It's super exciting, but it's an incredibly surreal and beautiful season for me. Often, you can feel like God's stirring things in your heart, but then you don't see them when you think that He was going to bring them. It was seven years ago now that I felt like God started stirring in me to write my own music. We were meeting people all over the world [who were] being rescued by music — they were going to kill themselves, or they were addicted to drugs, and they hear a SKILLET song on the radio and it saves their lives. I just think it's incredible how God uses that. I was meeting a lot of girls that were learning drums because of me, and it sounds silly, but changing their hair to be like me. I just feel super humbled at the power of influence that God's given me on this platform, and basically, I felt really challenged — like, with all these media stars, Instagram stars, reality TV stars being the loudest voices into this young generation, if I've got a small platform and a small window where people are listening to me, why not use it in an even more vocal way to talk about my faith. I just felt like it was something God had for me, because I was seeing that people were listening, so why not take this platform? I'm not going to regret the fact that I went for it, but I might regret the fact that I never tried because I was too scared. It was honestly years of writing [and] not knowing when the right time was. It was within the last few years that the LEDGER sound and songs, they kind of had their own identity then. It's really matured. Truthfully, I've just been through more stuff, and I've matured as a person too. It seemed really clear that now was the time."

On how much of her success she attributes to her faith:

Jen: "It's all the Lord. It's all what He's done. It's all Him leading me. Truthfully, I wanted to be a hairdresser in Coventry, England... I've been in SKILLET for 11 years, toured the world and now I'm doing my own music too. I'm, like, 'Thank God I said yes to you, even when it felt too big, even when it felt like I can't do that.' I said yes out of obedience at the time, [but] He has blessed me with a journey and an adventure that I never thought was possible."

Jen: "Something I've fought a ton in my life is fear. When SKILLET asked me to try out, I said no because it scared me. I was 17, and I was, like, 'They're a rock band. I get sick playing on a Sunday morning at church, so the idea of playing for thousands, there's no way.' Not only that, but I looked to my left and right and saw a bunch of other people that played a lot better than I did, but I was praying about it... I was like, 'I don't know what you're doing with me, but I'll just go for it.'"

Jen: "It was about three years ago where I started to have panic attacks and anxiety in a way I'd never had before. I was waking up in the night with actual terror in my heart. It was horrible. It was when I was praying about the LEDGER project and it was starting to become more real. I just felt discouraged and I felt completely defeated. When you wake up in the night that afraid and you're claiming to be a person of faith on a platform, The Enemy quickly tells you, 'See? You're not good enough; you're not brave enough; you're not strong enough. This is who you really are.' It made me feel a bit like a fraud... it was about a year later [when] I was on stage with SKILLET and I felt the panic start to come back. It freaked me out. I came off stage and I talked to [SKILLET guitarist] Korey Cooper, and I said, 'After all these years, I cannot believe I'm still struggling with this same thing after fighting it over and over again. What if this is something that just never goes away for me?' She looked at me and said, 'Then you fight, Jen. While there's breath in your lungs and until the day that you die, you never stop fighting.' I wrote the entire [LEDGER] song 'Not Dead Yet' about that."

On the "Not Dead Yet" music video:

Jen: "I loved doing the video. It was actually too graphic — they made me tone it down. I didn't want to do a cheesy video. I wanted to represent what it felt like when I was really struggling with fear, and fear feels impossible to beat... I purposely asked for an MMA fighter. I found the biggest one I could find, because that's what fear does — it distorts. It makes everything you're facing feel impossible. The reason I'm completely beat-up at the beginning of the video is because it's meant to represent what it feels like when you're in it — you've already been through several rounds and you've thought you'd fought it already, and here you are facing it again. It leaves you feeling defeated, and it makes you feel like because you've fought it before and the fact [that] you've ended up down again, it makes you not want to stand up... I think that that is actually the battle. The battle isn't beating the thing in front of you. It's not about me getting bigger than my opponent. It's about choosing to stand because of who is with me. I could never beat that on my own, but He can... I'm not going to all of a sudden be bigger than the opponent. I'm not going to change here. I'm still broken; I still struggle; but He's with me, and He's chosen me, and He loves me, and that's where my power is."

LEDGER's self-titled debut EP was released in April 2018 via Atlantic/Hear It Loud. The group released a new single, "Completely", in March.

SKILLET's latest album, "Unleashed", was released in 2016. A new album is expected to surface this summer, when the group will headline the "Victorious War" tour, where they'll be joined by SEVENDUST, POP EVIL and DEVOUR THE DAY.