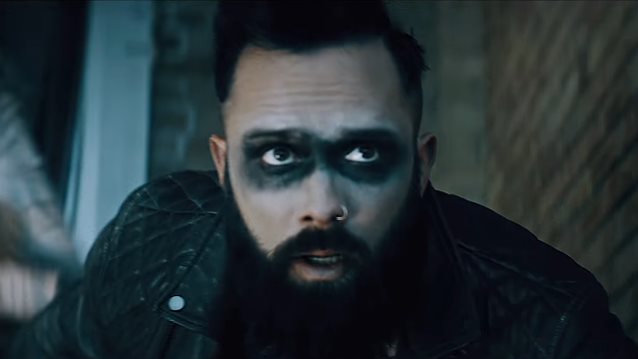 SKILLET's video for the song "Back From The Dead" can be seen below. The Roland Bingaman-directed clip tells the story of the band escaping from a testing facility and being chased by hordes of zombies.

The "Back From The Dead" video gives a nod to SKILLET's 2009 clip for "Monster", which has been viewed over 183 million times on YouTube.

SKILLET's John Cooper told Q103's Candace about the track and the video: "'Back From The Dead' was kind of funny. I wrote the song because when our last record came out, there was all this [talk about how] 'Rock is dead,' 'It's never coming back,' 'Nobody's ever gonna like rock music again.' And for people like you and me who make our living doing rock music, it's annoying. And for people who come to see rock shows, they know it's not even true. It's ridiculous. So it was getting entirely annoying to me."

He continued: "I was talking to a promoter of a concert. And this promoter kept… He was just [going] on and on about this new alternative band and the way music is going. And he was, like, 'You really need to… You can add some things to your set that would be more like this band.' So finally I said… I'd never heard of the band, which is not a good sign. And I said, 'Well, how many seats did you sell?' And he goes, 'Well, we sold out.' And I said, 'Okay. How big was the venue?' And he [goes], 'It only held four hundred.' We had two thousand people at the show [we were playing]. And I was, like, 'Maybe they need to do things like me. Shut up.' So I wrote a song about it called 'Back From The Dead', and it's a little bit of a 'screw you' to everybody that's saying [rock is dead]."

Cooper went on to describe the "Back From The Dead" clip as "really fun." He explained: "It was the biggest video [we've done]; we had about fifty cast members for the video, so it was quite fun. It's got a really dirty feel to it. It's very post-apocalyptic, 'Mad Max'-ish, 'Blade Runner'… that kind of vibe."

SKILLET has been touring in support of its latest album, "Unleashed". The current headline run will wrap on March 24 in Little Rock, Arkansas. SKILLET will also be making the rounds throughout the U.S. festivals this spring. The band has already been confirmed for Carolina Rebellion on Sunday, May 7; Rock On The Range on May 20; and will be one of the support acts on the KORN/STONE SOUR summer tour.

"Unleashed" debuted at No. 3 on the Billboard 200 album chart and has sold more than 160,000 copies in the United States.

"Feel Invincible" was the 25th SKILLET song to hit the Christian chart in the survey's 13-year history. The band previously peaked at No. 9 in 2007 with "Rebirthing".