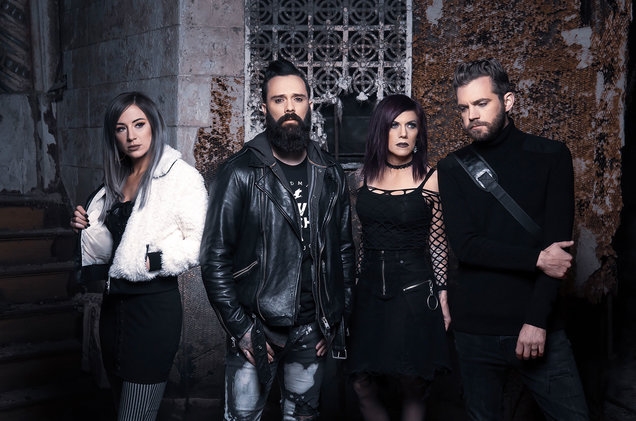 SKILLET will release its new album, "Victorious", on August 2 via Atlantic Records. The follow-up to 2016's gold-certified "Unleashed" includes the first single, "Legendary", which can be streamed below.

Frontman John Cooper told Billboard: "It's the first time that me and Korey [Cooper, John's wife and SKILLET guitarist/keyboardist] produced most of the record ourselves. When I was looking at what we did well on 'Unleashed', I thought it was a real energizing and fun record to listen to. That's what a great SKILLET record is — songs that make people want to put their fists up in the air at a concert or get them through a run or drive or whatever they are doing. So we set out to make a record that had a lot of emotion to it.

"We got to really dig in and try anything we wanted to try, and that comes through in some of the intricacies of the production," he added. "It's quite a musical record. I think it's a little bit more musical than we've done in a long time."

John and Korey co-produced six of the 12 tracks on "Victorious" and co-produced two additional songs with Seth Mosley and Mike "X" O'Connor.

The band's current lineup is rounded out by drummer/vocalist Jen Ledger and guitarist Seth Morrison.

John told Billboard about the new single: "'Legendary' is kind of fun because it sounds like SKILLET, but it's actually a little different for SKILLET as well. That opening guitar riff isn't like anything we've ever done on guitar. It's a little bit bluesy, a little bit rock. I thought it was cool.

SKILLET and SEVENDUST will embark on the co-headline "Victorious War" tour in August and September. POP EVIL will support, while DEVOUR THE DAY will open the shows. The tour kicks off on August 11 in Memphis.