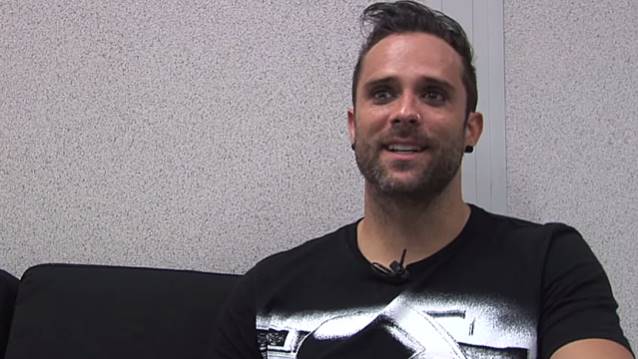 FaceCulture conducted an interview with SKILLET frontman John Cooper on May 31 at the Fortarock festival in Nijmegen, The Netherlands . You can now watch the chat in two parts below.

SKILLET will join GODSMACK and SEETHER, along with BUCKCHERRY, for the fifth Rockstar Energy Uproar Festival, which kicks off August 15.

SKILLET's run with the Uproar Festival will follow their current tour in Europe, where the band was invited to play multiple festivals throughout the continent, performing for thousands of fans. The tour began May 30 in Jelling, Denmark and will end July 6 in Sofia, Bulgaria with stops in Italy, Germany, Russia, United Kingdom and more. On their second European tour in support of the "Rise" album, SKILLET is making big waves across the continent. After completing a massive fall tour last year supporting NICKELBACK, with six back-to-back sold-out headline shows in Russia and encore-demanding crowds, the band is rapidly gaining a solid European following.

SKILLET recently played the Download festival in the United Kingdom, where Jen Ledger captured the attention of audiences and critics with her drumming skills. Out of 100-plus bands that performed at Download, MusicRadar.com named Jen among the 8 greatest drumming performances at the festival alongside Rob Bourdon of LINKIN PARK and Joey Kramer of AEROSMITH.