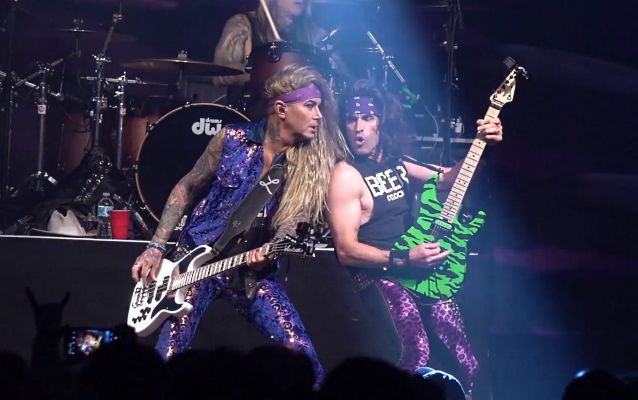 A 10-camera video edit of STEEL PANTHER's June 28 performance at The Fillmore in New Orleans, Louisiana can be seen below (courtesy of Tim Mcaskill).

STEEL PANTHER will release its fifth studio album, "Heavy Metal Rules", on September 27. The disc, which is described in a press release as a "heavy metal version of a self-help manual and ultimate party album combined," was once again produced by Jay Ruston, who collaborated with the band on all of its previous recordings, including its latest LP, 2017's "Lower The Bar".

The band says in a statement: "'Heavy Metal Rules' is the ultimate party album. Anthem after anthem and hook after hook, the songs will provide the soundtrack to your new bitchin' heavy metal life. The first single, 'All I Wanna Do Is Fuck (Myself Tonight)', is the ultimate song about self-love and having a positive personal self-image. It is the kind of song you put on to get yourself in the mood whether you're getting ready to have sex with yourself or 17 girls in a row."

From the opening track "Zebraman" (which is audio taken from the classic film "Heavy Metal Parking Lot") to the emotional album closer "I Ain't Buying What You’re Selling", STEEL PANTHER has created 36 minutes of audio eargasms. Songs like "Let's Get High Tonight", "Fuck Everybody" and "Gods Of Pussy" are destined to become natural additions to the band's setlist. "I'm Not Your Bitch" is an anthem for all acknowledged genders and sexual orientations worldwide.

The video for the first single "All I Wanna Do Is Fuck (Myself Tonight)", was shot in Las Vegas and features cameos from numerous celebrities from music, comedy, YouTube and more.

STEEL PANTHER will celebrate the release of "Heavy Metal Rules" with a concert at the Whisky A Go Go in West Hollywood, California on September 26.

Eleven years ago, STEEL PANTHER changed its name from METAL SKOOL to its current moniker and shifted the focus of its act from '80s metal covers to originals.

HOT OFF THE PRESS This is Steel Panther Live video i shot with Trent spann using 10 cameras at the Filmore june 28 2019 Live in New Orleans. Feel free to share The gopro Guitar cams are bad ass .