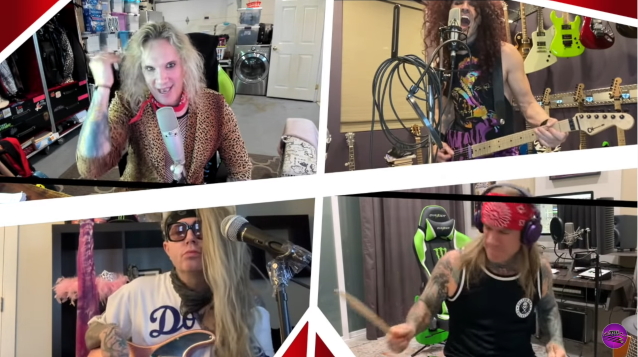 As the world continues to mourn the loss of guitar icon Eddie Van Halen, California glam metal jokesters STEEL PANTHER decided to pay tribute to the legend the best way they know how — by going back to their cover-band beginnings. STEEL PANTHER has recorded its interpretation of the seminal tunes "Beautiful Girls" and "D.O.A." from the classic album "Van Halen II". The songs have been some of STEEL PANTHER's favorites to play live and that became the inspiration to actually record them after all these years.

STEEL PANTHER's versions of "Beautiful Girls" and "D.O.A." are available via all streaming and digital platforms, and the band filmed a quarantine-style music video for each track.

STEEL PANTHER said: "When we were playing weekly shows on the Sunset Strip, VAN HALEN music was essential to our set lists to keep the place rocking. The music of that band is what helped shape who STEEL PANTHER is today.

"The loss of Eddie Van Halen has affected each of us in the band and these covers are our tribute to him to say thank you for the joy VAN HALEN music has given us."

Last October, STEEL PANTHER guitarist Russ "Satchel" Parrish reflected on the passing of Eddie Van Halen, calling him "a great guitar player and a great songwriter." The legendary VAN HALEN axeman died on October 6 at the age of 65 after a long battle with cancer.

Satchel spoke about his admiration for Van Halen during an appearance on the "Talk Is Jericho" podcast. He said: "A lot of people know this, but [STEEL PANTHER singer] Michael [Starr] and I used to be in a VAN HALEN tribute band [ATOMIC PUNKS] for years. As far as tribute bands go, that band started in the early '90s, just as a way to make money, but also because we were huge VAN HALEN fans, and we all grew up learning to play rock on VAN HALEN. That's the first stuff I remember hearing on guitar that blew me away when I was, like, seven years old. Somebody played me 'Eruption'. I didn't even play guitar yet, but I just went, 'Uhhh… That's a guitar?' I didn't know that a guitar could make that sound. And, of course, I think that was part of what made me become a guitar player, looking back in retrospect.

"Eddie in the early days, listening back to some of his live playing, there's no guitar player that's been better than that, in my opinion. He was so on fire, and he had so much attitude. And his tone was so clean. Most guys would never be able to play the kind of stuf he got away with, with so much aggression and just attitude. It was unbelievable. He was a technician, but he was also such a great performer as well. And he didn't have to concentrate. How many guitar players do you know who could smile like Eddie and make it look so easy, and actualy look totally at ease, 'cause he was at ease, and play the kind of shit he was doing. It was mind-boggling. It was like he was laughing at all of us — like, 'You'll never be able to do this.'"

Satchel went on to say that he was shocked to learn of Eddie's passing.

"We all knew that he was sick, and we all had talked about it for a while, but the longer he went, the more you just kind of go, 'Oh, well, maybe it's not gonna happen,'" Satchel said. "And then all of a sudden, it happens, and it's like a ton of bricks.

Starr, who fronted ATOMIC PUNKS in the 1990s and early 2000s under the stage name David Lee Ralph, told Rock Titan TV: "You don't realize how rooted in VAN HALEN one is until one heavy metal hero departs the world, and for me, that's what it's been like. I didn't even know what to post or say or do.

"I didn't realize how much [Eddie] was a part of my life — inspiration, music-wise. That band was everything for me. And I'm sure it's the same for a lot of people. I always wanted to David Lee Roth. I always wanted to be Eddie. I can't play guitar that good, but… And thankfully, I got to meet Dave several times, and I also got to meet Eddie a couple of times before he passed away. And I'm grateful. I only met him briefly, like, 'Hey, what's up?' I met him at a place called Staples, back before Gary Cherone joined [VAN HALEN]. It was him and [his son] Wolfie in the checkout. I'm, like, 'Hey, Eddie. I'm a big fan.' He's, like, 'I know your band. ATOMIC PUNKS. You guys are pretty good.' And I was, like, 'Holy shit! Eddie Van Halen knows our tribute band.' That was a huge deal. Then I went to [VAN HALEN's] dress rehearsal when they first rejoined with Wolfie at the Forum [in Los Angeles]. And I was walking in front of the stage, and I saw Eddie walk up, and I just walked to the stage and shook his hand and said hi, and that was the end of it. So, to me, I look at Eddie as this just complete rock god.

"VAN HALEN was everything for me," Starr, whose real name is Ralph Saenz, repeated. "I love SCORPIONS. I love MÖTLEY CRÜE, DEEP PURPLE, CHEAP TRICK, RATT, BON JOVI, WHITE LION… I love all that stuff, but to me, it all started with VAN HALEN. Everyone tried to copy Dave and Eddie."