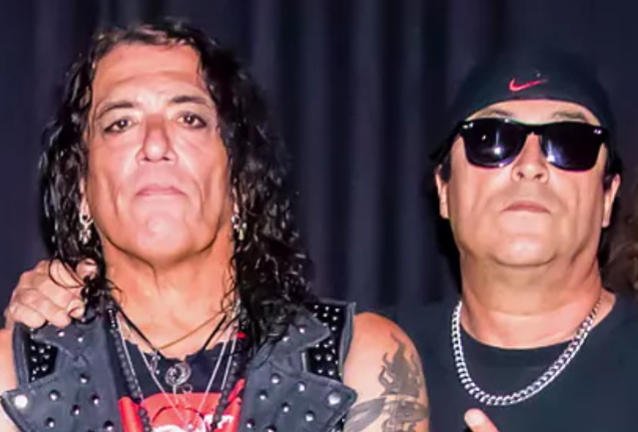 In a new interview with the "Appetite For Distortion" podcast, RATT singer Stephen Pearcy spoke about how the coronavirus pandemic has affected the band's plans for new music as well as the progress of the songwriting sessions for his next solo album.

He said (hear audio below): "RATT was going to go into auditions for a rhythm guitar player and try to record a song or two and welcome in the new year, but there's all time to do that. So we'll now put that on the backburner until everything is really back into the norm. But as far as me and my solo career, I've been working on my sixth solo record for the last year and a half, ready to go, ready to go and record it. And I'm also releasing a legacy record of songs from my career, 1977 till 2021. So I've got a lot on the plate. So I'm good here. And we'll see what happens. Hopefully everything will be back to normal soon."

According to Pearcy, his decision to focus on a new solo album was born out of necessity, not preference.

"I'm always prepared to do RATT music, but if my partner is not into it, then I just switch tracks and move forward. Anything I write for myself, or just write — period — is thought of as RATT music, and I pretty much bring it [to RATT first]. If I know it's really RATT sound and has that schematic, then I'll bring it to… The only partner here left is Juan [Croucier, RATT bassist], and if there's no interest in recording from the guy, then I just move forward and record it for me."

Stephen went to say that the solo song "All That I Want", which he released in April, was originally meant to be a RATT track. "It didn't happen [with RATT] — we didn't get in the studio before we went on the road last summer; that's how old that song is, but it's new — it's still a new song," he said. "I just recorded it solo and put it out, so people have something to listen to until I get the solo record finished. But it's written — ready to go.

"Anything I write, people expect it to be RATT, and why am I not writing RATT music," he continued. "It's, like, well, I do — all the time.

"At the end of the day, for me, it's all good, no matter where the songs go. But I pretty much offer 'em to my band RATT first, obviously, and if it doesn't go down, then, sure, I'll keep 'em for me."

Pearcy also lamented the fact that so many of his peers have no penchant for putting out new music because they believe that most fans of classic rock bands don't always like to listen to fresh material.

"Some of your own bandmembers don't wanna work these days," Stephen said. "They don't think they have to write new music. You could live off your, per se, legacy, and you can play your songs — classic rock, which it is now. And believe me, it's a very good thing, what we've accomplished.

"A lot of my peers from the '80s, they don't think they need to do records; they don't think records are important," he added. "I can honestly say my bass player, Juan, doesn't think it's important. But to me, music is always important… My bass player is not breaking down any walls trying to get music out with me for RATT. And I can say it, because I'm the one that's having to end up doing a solo record, and the songs sound like RATT, because I know people wanna hear new music, and I happen to be the singer guy. But you literally can just be a jukebox — just going through the motions."

Pearcy's fifth solo LP, "View To A Thrill", came out in November 2018 via Frontiers Music Srl. The follow-up to 2017's "Smash" was produced by Matt Thorne and Pearcy and was mixed and mastered by Thorne and guitarist Erik Ferentinos.

Pearcy and Croucier are the sole remaining original members in RATT's current lineup, which made its live debut in July 2018 in Mulvane, Kansas. Joining them in the band are drummer Pete Holmes (BLACK 'N BLUE, RATT'S JUAN CROUCIER) and guitarist Jordan Ziff (RAZER).