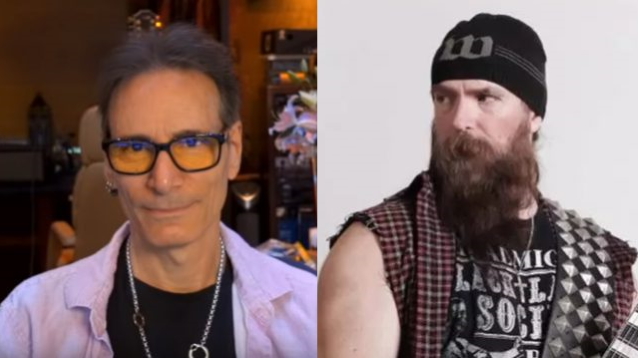 "Well, with Zakk, it's like with the other ['Generation Axe'] guys in that there's a professional relationship where we knew each other through the years as we were both kind of in the same business and at the same levels and this kind of thing, and always nice to each other and maybe occasionally we'd get to play together," Steve said. "It's like that with all the guys. But you don't really get to know somebody until you're touring with them. And each one of the 'Generation Axe' guys are just amazing; I love them like brothers. And Zakk is just — oh my god. It's hard to explain him. He's so funny, so lovable, so intense. He is so much himself.

"People struggle to find their authentic personality, because most of the time they're not themselves because they're placating somebody else, or they're acting differently around different people," he continued. "Zakk doesn't even know that. He's like Zakk no matter where he is with anybody, and it is so funny, because he wears who he is on his sleeve. And he's a smart guy, but he has an aversion to being serious. And that's so refreshing. And he's just funny.

"He's so suited for what he does," Vai added. "I mean, I've never in my life seen a musician with that kind of stamina. I'd watch that guy, I'd watch him, like, just playing, and he just rips [constantly] — he's just ripping, ripping, ripping — and I'm, like, 'This motherfucker just doesn't let up.' And I'm, like, 'Okay, all right. That's cool. I've gotta do it.' Because that's how you get inspired — you see somebody doing things that inspire you, and I'm, like, 'All right. I've gotta do that.' Not the way he does it — in my own way. And I can't. I can do it in chunks, but to be that intense for a 12-minute guitar solo and not let up, that's a big-boy game, man."

In September 2019, Vai released a Blu-ray edition of his 2015 live DVD, "Stillness In Motion", via his personal record label Light Without Heat, distributed by The Orchard. The release features Vai's complete performance at Club Nokia in Los Angeles on October 12, 2012.