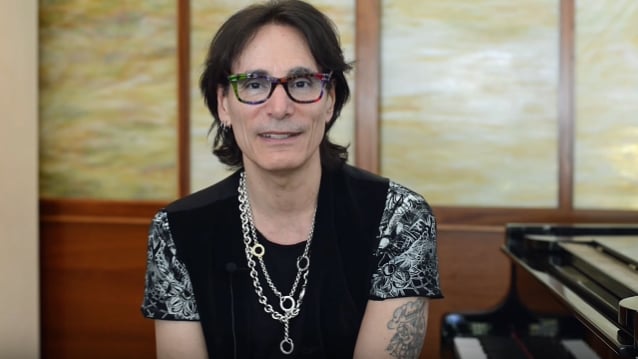 Guitarist Steve Vai recently spoke with Jedd Beaudoin of the Wichita, Kansas radio station 89.1 KMUW. The full conversation can be streamed at this location. A few excerpts follow (as transcribed by BLABBERMOUTH.NET and KMUW).

Steve: "It was fantastic. It was one of those things where we got into and we didn't quite know what to expect, but it turned out so much better than we could have expected. We did the Asia run, and we tried to do a Europe run, but the biggest challenge with 'Generation Axe' is everybody's schedule lining up. We couldn't do that but hopefully, maybe, at one point we will. We decided a good time has passed to do another U.S. tour, and I'm actually working on a live record that was recorded from those Asian shows. It's turning out so great. I had no idea. Well, I had an idea."

Steve: "When I first designed the seven-string for Ibanez, I used it a particular way. I knew, instinctively, that if young musicians saw the potential in it for their ideas, it was going to evolve into something pretty incredible. That was made very apparent to me when I first heard KORN. They had taken the seven-string and taken that low potential way, way beyond what I was doing. That was a beautiful evolution to see. Then there was that whole underground movement of seven-string bands and players [who] created a whole subculture. But then, of course, the way us humans like to evolve our creativity, it went from seven strings to eight strings and [now] there's people with nine strings. I knew that eventually, somebody was going to come along and take that seventh string or eighth string and start doing something even more unique than conventional metal at the time. That's Tosin. He was the first one that I heard taking that instrument, especially with the eight strings, and doing something that really ticked off a lot of the things that I like about heavy music and music in general. His music is complex, but it's listenable. It's dense in its harmonic and melodic structure, meaning that it's not just regular kinds of chords. I love that. Rhythmically, it's unique. I worked for Frank Zappa for six years, in the band and also transcribing music. I was confronted with a lot of rhythmic challenges, and even the evolution of certain kinds of rhythmic notation. But what these guys are doing now was off of my radar at the time. You can hear it in Tosin's music. It's the continual evolution."

On whether he ever wondered what guitar stalwarts like Les Paul thought of his playing:

Steve: "Yeah. I suspect that he was thinking similarly to the way I think when I see these new players coming along. I'm two generations removed now from new players. You had the kind of thing I was doing in the '80s, and then the '90s came along and the guitar turned into something different. It was more of a tool for the song. Then, in 2000 was when that underground metal movement of the intense kind of shredding playing started to emerge. In 2010 through '20, I see this whole different kind of movement that's more in the line of acoustic guitar playing. Real evolution's going on there. But the regular kind of playing, it's gone back to these superhuman kinds of chops. I see people shredding on the instrument and it's just, 'Whoa!' They really honed their chops."

On whether he's worried that the proliferation of DJ culture has endangered the guitar:

Steve: "I don't think about any of that stuff. It's all nonsense. People get conditioned by what they read in the papers or watch on TV. When I start seeing myself being conditioned by what somebody else is doing or saying, a little red flag goes up immediately and it says, 'Don't worry about any of that. Just do what you like!' That's my credo for any of that discussion about, 'The guitar is dead' or 'This is happening' or 'That's happening' and 'This is in vogue.' I don't listen to any of that stuff. Why would I? Why would anybody, unless they're interested in being a trend-mongering, pantomiming-of-the genius-of-somebody-else kind of a player? The thing that I recommend is, find out what really interests you the most and excites you in your inside, not based on what you think you should be excited about because somebody else is, or because this is the direction that things are heading. You are the direction that things are heading."

The current "Generation Axe" tour wraps up on December 18 in Los Angeles. Each tour stop will include a variety of collaborations by the five players, including everyone performing together as one cohesive band with a shared rhythm section. 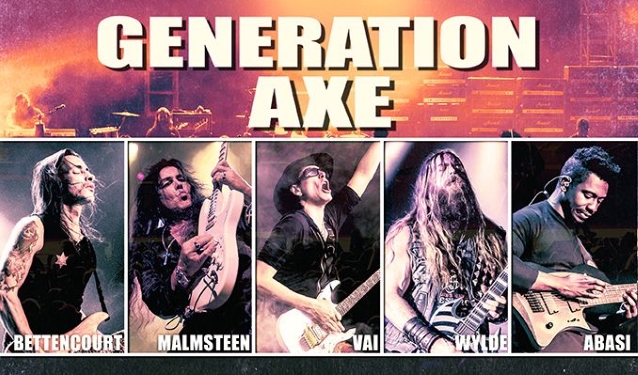