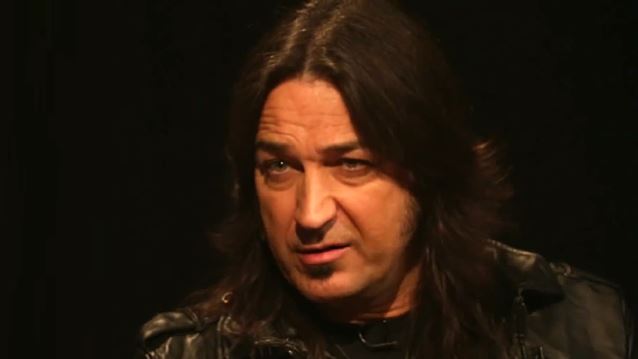 In a brand new interview with CrypticRock.com, STRYPER guitarist/vocalist Michael Sweet was asked what he thinks about the current Christian metal and rock scene. "I do not really keep up with it," he replied.

"I come from a different school of thought and I do not like all the labels. I do not like being referred to as a Christian rock band.

"We are not a Christian rock band; we are a rock band comprised of Christians.

"BLACK SABBATH [bassist] Geezer Butler [wrote] the song 'After Forever', which is about Christ, but they were not labeled a Christian band. Actually the opposite; they were labeled a dark, almost at times a Satanic band, and they are not.

"My point is that I just do not like all the labels.

"If you are going to label a band a Christian band, then you got to label all the other bands.

"If U2 is made up of members that are Catholic, then are they going to be called a Catholic rock band?"

He continued: "I do not know where the label 'Christian rock band' came from. It is hard for me to wrap my mind around it… It instantly puts you in a box. When they put you in a box, it limits what you are put on this earth to do.

"I just feel like it does limit the band. Some people misinterpret that as saying that I am ashamed of my faith or I am running from my faith. I think the exact opposite. We never ran from our faith, we have always been the most full Christian rock band that is comprised of Christians the whole time. We have never held back a punch."

Sweet added: "People certainly cannot say that we deny Christ or our faith, but I just do not like being called a Christian rock band. We are a rock band.

"I have been trying to break down that theory for a long time now, although I do not think I ever will. There is a genre of Christian rock and I guess that will always be."

STRYPER entered SpiritHouse Recording Studios in Northampton, Massachusetts last month to begin recording its new album, "Fallen", for a late 2015 release via Frontiers. Songtitles set to appear on the CD include "Let There Be Light", 'Big Screen Lies", the title track and a cover version of the BLACK SABBATH classic "After Forever".

"Fallen" will include a song that was co-written by SEVENDUST guitarist Clint Lowery.