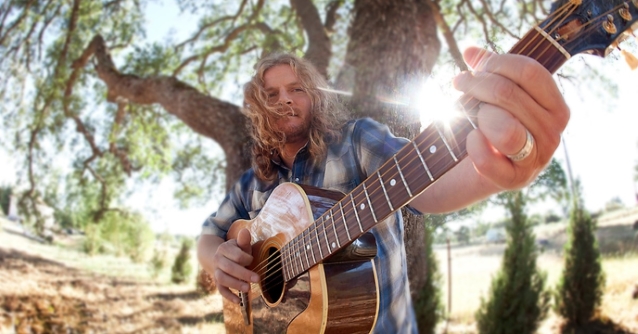 TESLA guitarist Frank Hannon recently spoke with Clint Switzer of the "Music Mania" podcast. The full conversation can be streamed below. A few excerpts follow (as transcribed by BLABBERMOUTH.NET):

Frank: "I went crazy this year. I had a lot of downtime on the road. You can get bored in a hotel room, on the bus, whatever, so I recorded these songs just to keep my sanity. I look back on it with hindsight 20/20 and just go, 'Wow, man, you really did create a lot of music this year.' Even though they're cover tunes, a lot of time and energy went into making it. I think I'm nuts — I don't know what to tell you. [laughs]"

On why he decided to start recording covers in the first place:

Frank: "The whole premise of this project started off with me wanting to pick some songs to develop my singing voice. Being a fan of guitar playing and music myself, and having been around for a while now, I've got some friends that were willing and eager to jump into the project with me. First up was Paul Jackson from BLACKBERRY SMOKE, [who was] very supportive, and Duane Betts and the Nelson twins, and now on this album, I've got Brad Whitford's son Graham, [who] plays a mean guitar on 'Lord Of The Thighs'. As a guitarist, to have guys that are even better players than me play some killer lead guitar, to have them on my project has really been electrifying. It's cool, and it's allowed me to focus on my vocals. A lot of people, I don't know if they realize, but I'm a closet, frustrated singer who can't sing to save my life, but I'm trying real hard on this project."

On why he decided to record a sequel:

Frank: "Originally, I was just going to do one album, but I had so many different, diverse ideas and things that I was recording... I was just recording anything and everything on this little portable recorder. When I had all the leftovers from 'Vol. 1', there was a bunch of leftover tracks that tended to be more ballads, and [when] I decided that I wanted to make a 'Vol. 2', I decided that I wanted it to be more rock n' roll and live. I got my band that I play with locally, and we went into a studio and recorded 'Hush', 'Spanish Castle Magic', 'Lord Of The Thighs', all those songs live. There's a great live spirit on the record that I'm really happy with. I do have even more songs left over for 'Vol. 3' that might end up being more of the ballad-side of things — the songs that were mellow that I left off 'Vol. 2'."

Frank: "I'm really, really, truly blown away by the career that TESLA and myself have had. It's a lot of work — we're very dedicated to it — but at the same time, music is a tough industry, and we've managed to keep ourselves going based on our songs and fanbase. People really have a great time at our shows, and we enjoy it so much, so we're very blessed. We never really had a huge mega-hit. We're kind of like an underdog kind of band, but when I do play the intro to 'Love Song' or 'What You Give' or we start 'Modern Day Cowboy' at the shows, the people really react even more now than they did in 1986. It just shows me the loyalty of the fans to the music and the integrity that the songs have. It's all about the songs, and... as long as people are happy and we can bring the happiness, then that's what we're going to keep doing. I feel very lucky to be in a business that brings joy to people and makes people happy. Entertainment and playing music and providing them with an escape, a place to go that's outside of their normal routine, it's a very cool job. I wouldn't trade it for anything."

On TESLA's other guitarist, Dave Rude:

Frank: "The twin guitar sound is definitely the chemistry that TESLA has had since the beginning. Our original guitarist that started the band with me, Tommy [Skeoch], he and I had a great chemistry with our right hands. The rhythm is the most important thing. When you play your guitar solos, even lead playing comes from the right hand. That's where the sound comes from. That's a quote from Joe Walsh. He's so right. A lot of people think it's all in the left hand, but it's really in the right hand. For a long time, I searched and played with a lot of different guys in my solo band, trying to find the perfect guy from TESLA. It wasn't until I found Dave Rude and his right hand and his timing that I knew he was the right guy... He is an integral part of the band, and was the perfect meant-to-be guy in the band for the next generation of TESLA based on his attitude, number one, and his rhythm in his right hand and the chemistry in our playing, number two. He has been the saving grace for the band. We went through a lot of hard times... people don't realize this, but in the '90s, when Tommy was having his problems and the music industry changed and divorces and all these ups and downs that were going on in that era for TESLA, it was very, very difficult. I think it's why we cherish it so much now more and really take care of it now more than ever, because we've been through the rough times. We've been through the bottom of the barrel, being broke and scraping to find a job. There was a time — people don't know this — but when TESLA broke up in the '90s after we had played arenas and stadiums and I had three little kids and was broke, I got a job just like the rest of the world has to work, hanging sheetrock and picking up trash. I had a job feeding the wood chipper, trimming trees. My friends were going, 'You're crazy, dude. You play guitar. You're going to cut your hand off. What are you doing?' I had to survive, man, and that's just the way life is. But now, we've rebuilt it again, and Dave's been a big part of it. We're very blessed."

Frank: "Phil Collen taught us a lot. We really learned a lot, and this new TESLA album, it's loaded with TESLA music but multiplied by ten by the stuff we learned from Phil. The guy is just an enigma. He's full of positive energy, and he coached us. You never stop learning [in] anything you do, and TESLA learned a lot production-wise [from Phil]. He took our song ideas and really produced them to the max, and I think people are really going to be blown away by the album. The sound, the production and the songs are taken to a new level for us. He taught us that you can be productive on the road. I'll be honest — TESLA may not have made another album because we were stuck in these ways of thinking that, 'You can't do this. You can't do that. You can't write songs on the road.' Phil proved us wrong and taught us that we can do it, and not only that, I made a solo album on the road too. You can do whatever you set your mind to do in this world and in life, and Phil taught us that, and it was a great experience."

"Shock", TESLA's ninth full-length album, is tentatively due in early 2019.

Hannon's "From One Place... To Another Vol. 2" was released on May 18, just four months after the initial installment in what is planned to be an ongoing series of solo cover albums.