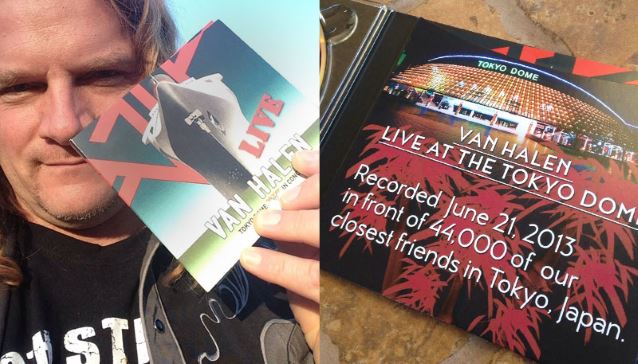 TESLA guitarist Frank Hannon has offered his thoughts on VAN HALEN's "Live: Tokyo Dome In Concert", the first live album from the band to feature David Lee Roth on vocals. Hannon said in a posting on his web site: "Okay, after all the flames have settled down from people burning up David Lee Roth's vocals on 'Jimmy Kimmel', here's my thoughts on the new VAN HALEN live at the Tokyo Dome CD.

"If you are a fan of truly 'live' albums, as I am, and have stated, this album rules! Just to hear Eddie's [Van Halen] guitar tones on 'Romeo's Delight', 'Beautiful Girls', 'Women In Love' alone is worth the $16. As for Dave, well, he's included a six-page book with lyrics to read the words he don't sing… and to hear him tell of the spotlight operator in 'Ice Cream Man' is priceless, not to mention all the Japanese BS he rambles.

"I thoroughly enjoyed listening to this CD while driving my 17-year-old to school this morning remembering hearing VAN HALEN when I was his age and loving it!!!

"For those of us who anxiously waited in line at Tower Records to get 'Van Halen II', 'Women And Children First' and 'Fair Warning'… this album will tickle your fancy… For those who want perfect vocals, buy a ONE DIRECTION live album!"

In an interview with the Las Vegas Review-Journal, former VAN HALEN singer Sammy Hagar said about "Live: Tokyo Dome In Concert", "I'm trying to tread lightly on the whole thing. Every time they do something, I'm like, 'Oh my god, can these guys do anything worse to their reputation and to the level of the music of the band?'" He added that record, which reportedly features no overdubs, has "got some pretty rough vocals."

Hagar cut his own live album with the band during his tenure on the mic, 1993's "Live: Right Here, Right Now". He told The Pulse Of Radio a while back that he thinks the VAN HALEN camp isolates itself from the music scene to the detriment of its own output. "They're so out of it," he said. "They sit and they hide in their little closets, y'know? They never get out. They never go around to other people. They never listen to the radio. They don't do anything to stay current or to just keep their hand on the pulse, y'know?"

Guitarist Eddie Van Halen explained in a recent interview with The Washington Post how the new live album came to be, saying, "None of us wanted to sit there and listen to 200 shows to pick the best one. So we left it up to Dave… Dave said, 'How about Tokyo Dome?' We said, 'Fine.'"