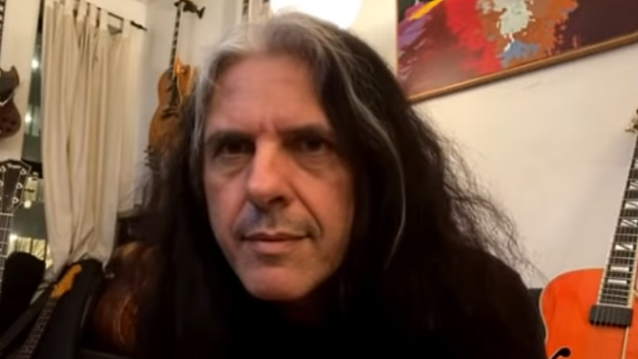 During a recent appearance on "Waste Some Time With Jason Green", TESTAMENT guitarist Alex Skolnick reflected on landing the coveted guitarist gig in Ozzy Osbourne's band in 1995 only to be told less than a month later it had been given to someone else.

"I didn't know the whole back story, but I guess at that point, Zakk Wylde was doing his own thing, and they were looking to move on from Zakk, even though he had recorded the most recent album, which was "Ozzmosis'," Alex said (as transcribed by BLABBERMOUTH.NET). "They were not doing a public audition; they were trying a few different players. I know Richie Kotzen auditioned; a great player, by the way. Some others as well. But for some reason, they hadn't found the right fit. And I ended up flying to London and auditioning with Ozzy in a dingy rehearsal place in London. And I was basically there for about a week. We ended up doing an unannounced show. And it seemed to go well. He seemed really happy. Everybody in the crew said, 'This is the happiest we've seen him. This feels right. I'm sure you've got this.' Ozzy basically told me I've got this. But then the one person who didn't congratulate me was the one who was supposed to let you know if you're hired or not," referring to Ozzy's wife and manager, Sharon Osbourne. "She didn't seem disappointed, but I kind of got the sense, 'All right. It's not decided.' Anyway, a bunch of time goes by and I don't hear anything, so I kind of assume nothing's happening. And then I find out they got the guitarist Joe Holmes, who had auditioned for them earlier on. He had been a candidate at the time Zakk Wylde had tried out."

Skolnick went on to say that he got the impression Sharon and the rest of the Ozzy camp were trying to mold him into something he wasn't. "I was also getting these messages — subtle messages — about my stance and lowering the guitar," he recalled. "And I realized, 'Oh…' Now, having been in the music and entertainment industry for a while, and knowing about casting and things like that, I think they were very used to Zakk, and I think at first they were trying to make me more like that. They were used to this guitar-slinging, lumberjack thing. I don't know — obviously, you would have to ask her — but I would guess that instead of somebody sort of known and somebody that's gonna be this featured [guitar] hero, let's just take somebody who can play well but will move into the background. And that's how that was. And I wouldn't have been happy doing that."

In a 2004 interview, Skolnick called the experience of being dropped from Ozzy's band "a major lesson in the music business." He explained: "I go home [after playing the Rock City gig in Nottingham, England] and don't hear anything for three weeks. Finally, I called Sharon's assistant, who was surprised that she hadn't called me yet and that I should expect a call from Sharon. I sensed bad news. When Sharon called, she told me they really liked my playing and appreciate the time I put in, but they've decided to hire someone else, Joe Holmes. With all due respect to Holmes, to this day everyone I've spoken to has no idea why they [or she] made this decision. I was told it might have been because Holmes was a former student of Randy Rhoads."

TESTAMENT's latest album, "Titans Of Creation", was released in April 2020 via Nuclear Blast.