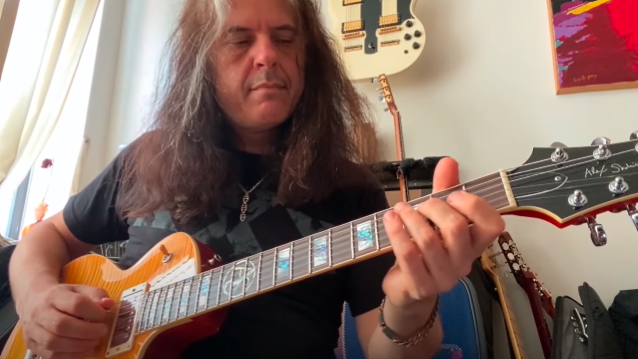 TESTAMENT's Alex Skolnick has released a guitar playthrough video for the band's song "Return To Serenity" in order to help raise awareness of Metal For Nepal, a non-profit organization which aims to bring the global metal and arts community together to tackle the humanitarian crisis caused by COVID-19.

In a statement accompanying the clip, Alex wrote: "This one seems to get requested more than any other song or solo. As it hasn't been played by the band in forever, it required relearning and was planned for sometime later this year. Then, friends in Nepal recently asked if I might consider doing a 'play through' of a TESTAMENT song to help raise awareness of their humanitarian organization (metalfornepal.org) in wake of C19's particularly devastating effect on parts of the region. Since this tune seemed a perfect fit, it was moved to the top of the priorities list. Please consider visiting metalfornepal.org and supporting. Thank you and enjoy."

TESTAMENT's latest album, "Titans Of Creation", was released on April 3 via Nuclear Blast. The disc was produced by guitarist Eric Peterson and singer Chuck Billy, while Juan Urteaga of Trident Studios handled co-producing, recording and engineering. Andy Sneap was responsible for the mixing and mastering of the album. Eliran Kantor stepped up once again to create new artwork for the cover of this release.