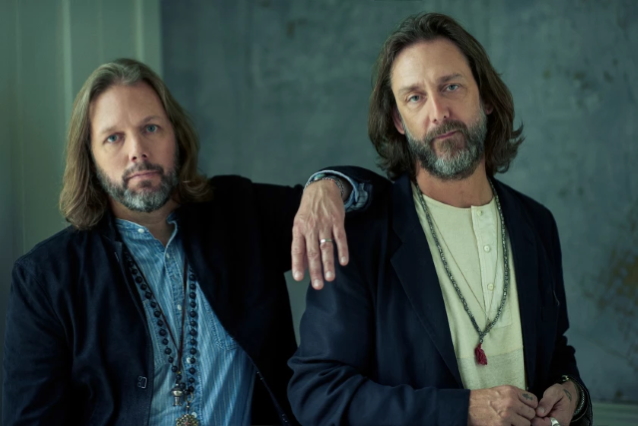 Produced alongside Chris and Rich Robinson, the book is a huge photographic essay on the band, formed in Marietta, Georgia in 1984. The book features introductions from both brothers. Chris writes in the book: "To say that THE BLACK CROWES & Mr. Halfin have a long history together is most definitely an understatement. Here in these photographs you will see & feel."

Ross comments: "Could I tell you stories about this band? I could probably tell you a hundred, and one of the highlights was seeing them opening for THE ROLLING STONES at Wembley Stadium and whilst doing an hour's set they did a 25-minute version of 'Thorn in My Pride'. In hindsight, perhaps not the best idea to warm up 90,000 people, although I did think it would be funny if they put it out as a single and called it the 'radio edit' — but that's not really the point to this. It's something I remembered which made me laugh. Then again I saw them at The Forum in London when they did a really succinct and great rendition of the Joe Tex song 'Hush' made famous by DEEP PURPLE."

Two editions of the book will be available: A huge 600-page-plus edition, numbered and signed by Chris and Rich Robinson complete with a luxury slipcase and lenticular print; and a stripped down 300-page version, unsigned. Both books measure 245mm x 345mm. The deluxe version will cost £300 and the standard edition will cost £89 plus delivery worldwide.

Joining Chris and Rich Robinson in the new BLACK CROWES lineup are longtime bassist Sven Pipien, who played with the band live from 1997 up until the band's hiatus in 2015, along with Brian Griffin on drums, Joel Robinow on keyboards and Isaiah Mitchell on guitar, plus backup singers Mackenzie Adams and Leslie Grant.

Rich told Cleveland.com that he and his brother wanted to re-start THE BLACK CROWES with a clean slate. "There was a strong agenda in the band [previously] to keep Chris and I apart and keep Chris and I fighting," he said. "We just didn't want to have to deal with any of that negative [stuff], so it had to be this way in order for it to be what we want."

"Shake Your Money Maker" was re-released in multi-formats sets in February through UMe/American Recordings. The album, fueled by singles "Jealous Again", "Twice As Hard", "She Talks To Angels" and a cover of fellow Georgian Otis Redding's "Hard To Handle", has sold over five million copies.

Chris Robinson recently confirmed to SiriusXM's "Trunk Nation With Eddie Trunk" that there are tentative plans to record a new BLACK CROWES album.