Still celebrating his "50 layers of time," former AC/DC drummer Chris Slade hits the road in the U.K. again and for the latest phase of the tour welcomes a new member to THE CHRIS SLADE TIMELINE "family" — Paul Davis will be lending his powerful vocals to the AC/DC material in the set. Paul was previously lead vocalist for '90s Hells Angels favorite heavy rock band ROCKWEILER before moving on to West London metal band GALLUS DEI and is currently the frontman for BAD BOY BOOGIE and newer project SPY ON MAIDEN. Paul has very big shoes to fill, on previous shows the AC/DC part of the set has been covered by Leon Goewie of Dutch band VENGEANCE — Frank Knight from X-WILD and a very convincing Brian Johnson in the form of Dave Slamin of RIFF RAFF. Paul will be joining the Slade along with the nucleus of THE CHRIS SLADE TIMELINE: Steve Glasscock on non-AC/DC vocals, James Cornford on lead guitar, Michael James Clark on guitar/keys and Andy Crosby on bass.

This personal project of Slade's which headlined Rock 'N' Blues Festival in Derby 2013, will continue to include material from his illustrious career as a top rock drummer… AC/DC, EARTHBAND, URIAH HEEP, THE FIRM, ASIA, Gary Moore, David Gilmour, MSG, to name but a few since joining Tom Jones in the early Sixties as one of Tom's "Squires" at the tender age of 16 years. The U.K. tour continues in April 2014 with dates in London, Leicester, Rotherham, Lancashire, Kent, Worcestershire and Nottinghamshire, with new dates being added all the time.

Astonishingly, Slade's career shows no signs of winding down but continues as busy as ever. He has recently completed another tour in Russia with THE CLASSIC ROCK ALL STARS which also includes artists such as Tony Martin (BLACK SABBATH), Geoff Nichols (BLACK SABBATH), Bobby Rondinelli (RAINBOW), Craig Goldy (DIO) and Greg Smith (ALICE COOPER). Chris also continues to spend much of his time on extensive personal appearances all over Europe, Russia and South America.

Slade received his highest exposure in 1989 when he was asked to join AC/DC as the replacement for Simon Wright. Slade played on the 1990 "Razor's Edge" album, which included "Thunderstruck" receiving a Grammy nomination for his work. Slade toured with AC/DC for three years and it culminated in the release of "Big Gun", which was part of the "Last Action Hero" movie soundtrack starring Arnold Swarzenegger. Slade left the band when former drummer Phil Rudd was reinstated. AC/DC guitarist Angus Young has since been quoted as saying that Chris Slade was "the best musician in AC/DC." 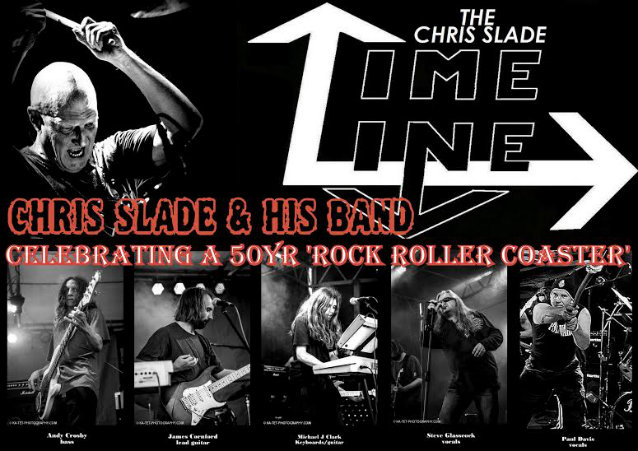