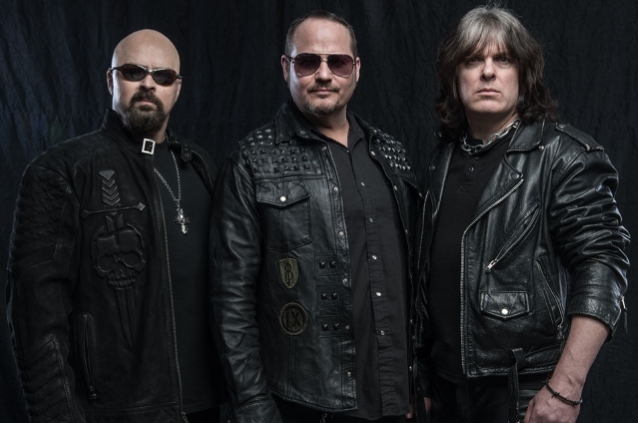 THE THREE TREMORS nourish in heavy metal anthems, and feature the illustrious chops of guitarist Dave Garcia, whose tenacity fuels the fire, allowing the music to naturally flow in complimentary tone. Second guitarist Casey Trask picks up the pace and pushes the boundaries alongside bassist Alex Pickard, who highlights a melodic sensibility giving character to the overall tonality. On drums, the thrash machine Sean Elg adds in his perfectly placed fills and signature double bass patterns.

It was announced in 2000 that Tate would be joining Dickinson and Halford in the all-star group, which was slated to record an album's worth of material with Dickinson's solo guitarist and Roy "Z" Ramirez.

Dickinson said that he and Roy wrote "about three songs" for THE THREE TREMORS during a session in Los Angeles before he "realized it was going to take us a lot longer than three weeks to write a project with three singers that would work."

Before Dickinson's proposed collaboration with Halford and Tate was officially scrapped, the name THE THREE TREMORS was changed to TRINITY because "we figured they would sue our ass if we called it THE THREE TREMORS," Bruce explained in an interview several years ago.

Back in late 2016, Owens, Tate and ex-IRON MAIDEN singer Blaze Bayley played a number of U.S. shows under the "Trinity" banner. Owens later said that while the tour "was a lot of fun," he would not be working with Tate again.