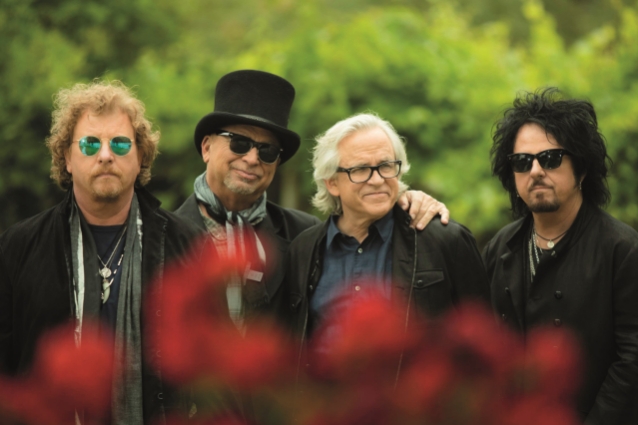 TOTO's founding guitarist Steve Lukather has told The Morning Call in a new interview that the band's current lineup — which also includes other founding members Steve Porcaro and, until recently, David Paich, as well as longtime vocalist Joseph Williams — will be over once the group's 40th-anniversary tour ends on October 20 in Philadelphia.

"I don't know what the future-future's gonna be, but I do know that's gonna be the last show in Philly for the foreseeable future," he said. "And certainly the end of this configuration of TOTO."

Speaking about the possibility of TOTO returning again with a different lineup, Steve said: "I don't know, man. I can't predict the future. I can tell you that this version is dead October 20… We gotta take a break from all this. We were beat up really badly and we gotta heal and figure out what's going on. I mean, the music's still there. I'm not saying I'm never gonna play this music again — that would be stupid to say; that would be a lie. I can play whatever I want from my entire career with whomever I want to, and so can everybody else. But I don't know what that is yet."

He continued: "We've been working really hard for a really long time if you look at the last 10 years of touring for the band, we've toured more than we ever have. We're playing better than ever. That's the irony. ... The band, we're playing great. When we walk on stage, man, it's like we're kids again, and we just give it all we got. It keeps you youthful inside. I feel great — I feel better than I did when I was 40, you know? As far as physically and playing-wise, the band's matured. We're playing together. It's fun — I'm having a great time. And that two hours plus on stage is what we're out here to do. That's our big payoff. We don't get paid for that — we get paid for the other 20 hours a day where we're in a very nice little prison called a hotel room. 've been on the road my whole life. Going out and seeing the sights — I've kind of done that, you know?"

Few ensembles in the history of recorded music have individually or collectively had a larger imprint on pop culture than the members of TOTO. As individuals, the band members can be heard on an astonishing 5000 albums that together amass a sales history of a half a billion albums. Amongst these recordings, NARAS applauded the performances with more than 200 Grammy nominations. Collectively, TOTO has over a billion streams worldwide on all streaming services.

With over 40 years together and literally thousands of credits, including the biggest-selling album of all time, Michael Jackson's "Thriller", and accolades to their names, TOTO remains one of the top-selling touring and recording acts in the world. They are the benchmark by which many artists base their sound and production, and they continue to transcend the standards set by the entire music community, being simply synonymous with musical credibility. Their repertoire continues to be current via high profile usage on broadcast television. They are pop culture, and are one of the few 1970s bands that have endured the changing trends and styles to a career enjoy a multi-generational worldwide fan base.

2018 was a banner year and the 40th anniversary for TOTO, which celebrated the occasion by embarking on its longest world tour in years. The band performed for hundreds of thousands of fans across Europe and North America, as their level of global critical mass reached new heights largely fueled by a rediscovery of favorites from their beloved repertoire.