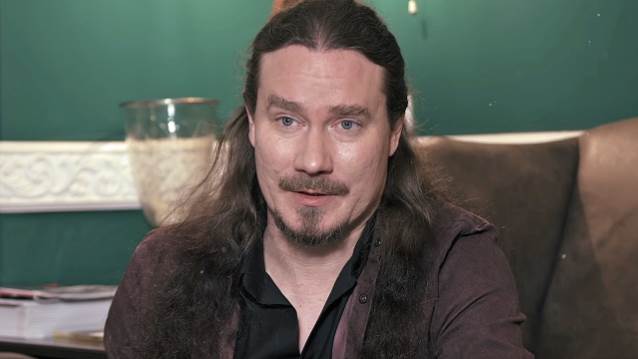 Metal Wani's Prathamesh Hoshing conducted an interview with NIGHTWISH keyboardist/songwriter Tuomas Holopainen at this year's Hellfest, which was held last month in Clisson, France. You can listen to the entire chat below. A few excerpts follow (transcribed by BLABBERMOUTH.NET).

On playing some of NIGHTWISH's lesser-known and deep catalog songs during their recent "Decades" tour:

Tuomas: "Basically, it has been a hilarious-like time machine. Like a road down memory lane. Some of the songs are a bit more challenging to play than others because namely of the lyrical content of the songs because I mean, things have evolved. I have evolved as a person, as a songwriter and I would never write such lyrics again, but then going back in time, I still appreciate them and I can be proud of them. But playing songs like 'The Carpenter', 'Dead Boy's Poem', it's a bit tricky. You have to set your mood to a certain state to perform it well. So, that's been a bit of a challenge. Other than that, it's been a great tour."

On which eras of NIGHTWISH he enjoys delving into during this tour:

Tuomas: "It kind of changes from night to night. There are certain songs that are always a pleasure to play live, like 'The Greatest Show On Earth', for example. I really like the vibe of a song like, 'I Want My Tears Back' because it makes the audience dance and it's one little happy piece. 'Ghost Love Score' is one of those songs because it always fires up the audience as well. The moment Floor [Jansen, vocals] hits that last final note, it's just shivers down the back for everybody, just to mention a few."

On the status of NIGHTWISH's next studio album:

Tuomas: "Well, it is still in the songwriting process. I have about, I don't know, 70, 80 percent of the material written. But nobody else has heard a single bar. They have no idea about the song titles or the themes or anything, so it's still in the very early stage. But it's looking really good and I'm really excited about what's come up so far. The idea is next summer, in June of 2019, we're going to go to the rehearsal camp once again, start working with the album, record it, and, if everything goes as scheduled, we're looking at a 2020 springtime release, followed by a massive tour, of course."

On the current state of drummer Jukka Nevalainen, who took a leave of absence from NIGHTWISH due to ongoing issues with insomnia:

Tuomas: "I was just with Jukka last week. We went to a baseball game. He's very much involved in the band, but his drumming is still a question mark because his insomnia is not totally gone, even though he's feeling much, much better. Then he had surgery on his hand at the beginning of this year, so he hasn't been able to play. To be honest, I don't know what the future is. At the moment, we have Kai [Hahto, fill-in drummer] — he's going to play until the end of this tour, for sure, but we'll just have to see early next year how Jukka feels and what the future brings."

On whether NIGHTWISH will ever accompany another one of their albums with a movie, like they did for 2011's "Imaginaerum":

Tuomas: "To put it simply, no. This was definitely a one-timer. If you thought the music business was complicated, try the movie business. It was kind of like diving into the deep end of the pool without knowing what's beneath the surface. But I'm glad we did it. There are no regrets. I like the result and I'm really proud of what we achieved, but it was definitely a one-timer and I also have my doubts that we're even going to do a music video in the future because that's also something I don't feel so comfortable with anymore. So I think there might be some new formats to explore in the future, but, honestly, I don't know."

On his songwriting inspirations:

Tuomas: "This beautiful and insane world, in itself, is a major inspiration to me. Just looking at what's happening, all the good, all the bad, the light and the dark, everything that's going on is a bottomless pit of inspiration. But, of course, sometimes, you want to write about more how would I say? More detailed, more concrete things. For example, a comic book duck, or, about the native American Indians, then I might read a book that really inspires to write a song like 'The Greatest Show On Earth', for example, so it's very diverse. The most important thing is just to feel inspired about something, whether it's something positive or negative or something that just needs to come out from your system."

NIGHTWISH's next album will mark the band's second full-length release with Jansen, who has been touring with the group since 2012.