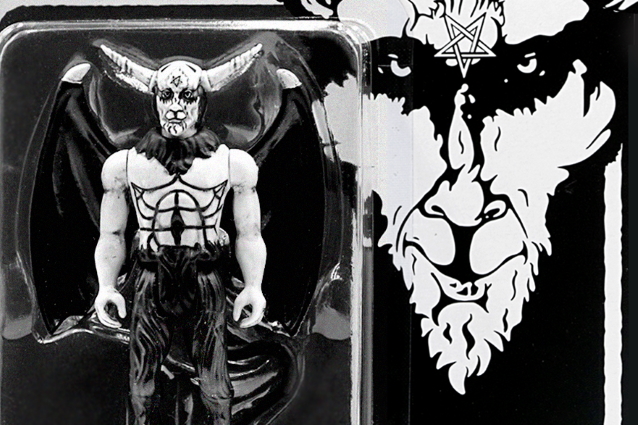 Super7 has officially announced a ReAction figure of the demon from the cover of VENOM's "Black Metal" album.

The company said in a statement: "Super7 is honored to add heavy metal pioneers VENOM to our 3.75" ReAction Figures music collection! The 'Black Metal' demon comes on a cardback that commemorates the influential 1982 album. The figure is based on the concept given to Super7 by the band's founding member Cronos."

Super7 is the premier pop-culture design house and producer of lifestyle-oriented collectibles, toys and apparel based in San Francisco. Led by designer Brian Flynn, Super7 has harnessed the graphics, aesthetics and energy of his youthful obsession with science fiction, giant monsters, comic books, punk rock, skateboarding, robots and rebellion to build a unique and innovative business that crosses all categories and is not bound by traditional manufacturing boundaries. Besides its own branded products, Super7 has also designed, manufactured, and distributed officially licensed programs for "Star Wars", "Masters Of The Universe", the original "Alien" and "Planet Of The Apes" movies, as well as for music legends IRON MAIDEN, MISFITS and KING DIAMOND.

When the SLAYER "Show No Mercy" ReAction figure was first released in February 2019, Flynn described his personal connection to the band, saying: "Growing up in the '80s, punk rock, skateboarding and metal were heavily intertwined. I learned about SLAYER first from their ads and reviews in Thrasher magazine. Needless to say, as teenage kids we were hooked on all things extreme, and SLAYER took it to the next level. Still to this day, SLAYER is on heavy rotation both personally and at the office, and 14-year old me could not be happier than to make a figure out of the artwork I drew onto folders, notebook covers, and blue lined paper for years."


OUT NOW: "Lay down your souls to the gods rock 'n roll!” Super7 is honored to add heavy metal pioneers Venom to the 3.75" ReAction Figures music collection! The Black Metal demon comes on a cardback commemorating the influential 1982 album. The figure is based on the concept given to Super7 by the band's founding member Cronos. Join the Legions at the link in our profile (super7.com). #venom #blackmetal #heavymetal #nwobhm #reactionfigures #super7 @venom_band_official