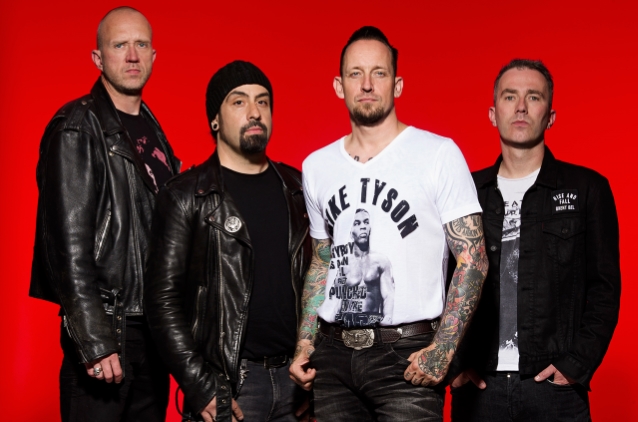 In an interview with Greece's "TV War", VOLBEAT frontman Michael Poulsen was asked if the band's new song "The Everlasting", which the band has been performing at some of its recent live shows, is indicative of the direction of the band's next studio album. He responded: "The last album [2016's 'Seal The Deal & Let's Boogie'] turned out to be more like a rock album. And you can have certain ideas when you sit down and write your songs, and going through the material that what kind of direction you're going, but at the end of the day, when I write, everything changes every day.

"The new song, 'The Everlasting', definitely has a heavy touch, but it's impossible for me to say if that's the direction for the next album, because we have so much material right now that we have to go through.

"After this show [at the Rockwave festival in Athens], which will be our last show this year, we go home to Denmark and start to finish up all the writing for the coming album," Michael added. "And we will go into the studio in November.

"Lemmy actually said it the best way. There was a guy interviewing Lemmy from MOTÖRHEAD. [The interviewer] said, 'So you released a new album. It pretty much sounds like all the other MOTÖRHEAD albums.' And he said, 'Well, thank you very much. Because the last time I checked, I was still in MOTÖRHEAD.'

"When you have that signature sound, it's so much in your DNA how to write songs and how you sound like. But we're still in the process where we can develop the VOLBEAT style and progress the VOLBEAT style."

Asked if VOLBEAT has plans to invite guest musicians to appear on its next album, Poulsen said: "When it comes to guests, it's always about when we write the songs that when you keep on playing them in the rehearsal room, sometimes you hear different singers or guitar players or musicians being on top of that. [You think] 'Wow, this could be amazing with Danko Jones,' or, 'This could be amazing with Mille from KREATOR,' or something like that, or Barney from NAPALM DEATH. So we've never really been writing stuff where we sit down and say, 'Who are we gonna bring to this album?' and then we write the song. We always write the material and then listen to the songs and see if it could fit other artists out there. But we do have plans for certain guests that we're flirting with a little bit right now. Some of them are already installed; others we just have to wait and see. I can't say anything, because it can change. So who knows?"

"Seal The Deal & Let's Boogie" arrived in June 2016 and featured the chart-topping "Black Rose" and "The Devil's Bleeding Crown", in addition to the Top Five title track.